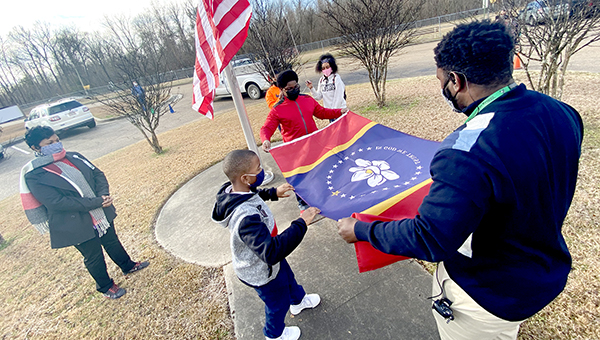 Students at Vicksburg Intermediate School made history Wednesday, as they became the first to raise Mississippi’s new state flag in front of one of the Vicksburg Warren School District’s schools.

The new flag — called the “In God We Trust” flag — was overwhelmingly approved by Mississippi voters in November and was ratified by the Legislature last week.

A group of four students — Kenyin Jackson (3rd grade), Javan Henderson (5th), Diamond Jackson (6th) and Jermaria Wright (6th) — made up an honor guard that raised the flags at Vicksburg Intermediate School. Coach Dexter Allen helped the students in respectfully handling the flags and making sure they were raised in the proper order.

“Y’all just made history,” VIS Principal Lakesha Batty told them. “How great is that? Y’all are the first to raise those flags in front of our school.”

Following Reeves’ signing the legislation Monday, the new state flag was raised for the first time Monday afternoon over the state capitol.

The legislation passed by the Legislature last summer that retired the former state flag, also set guidelines for the new flag. Some of those guidelines required the new flag carry the words “In God We Trust” and must not include any Confderate symbols.