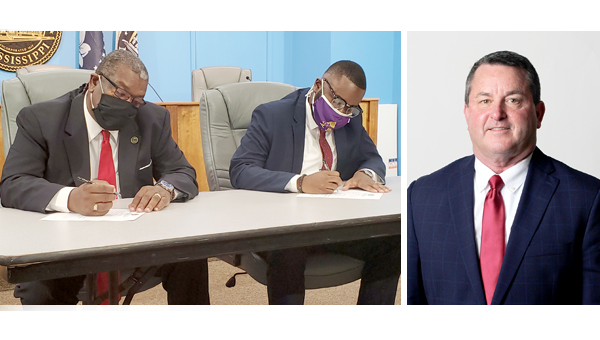 Vicksburg’s two incumbent aldermen qualified Thursday for re-election to their seats on the Board of Mayor and Aldermen.

The three men are the first candidates to qualify for office since qualifying opened on Jan. 4. The aldermen’s salary is $85,478 a year.

“Vicksburg is growing, the outlook as far as jobs is getting better; we’re on the cusp of growing, doing some good,” Michael Mayfield said. “So I come to the citizens of the North Ward in the city of Vicksburg and ask again that you vote and support me. I pray that the city will move forward and I pray that we find togetherness.”

He said he decided to run for re-election because he’s “heard more good about the city of Vicksburg. I sincerely hope I can continue to be a part of that. The city is growing. We’re going to continue to move forward.”

Michael said he did not encourage his son to run for office, adding, “I told him to think about it.”

Thomas Mayfield said he decided to run for office after going through a kidney transplant in 2019.

“I got to see things a lot differently and I came to understand that I had an obligation,” Thomas said. “I considered that for the first time in my life that I had to give myself to the people. To help somebody else, that has been my obligation.”

Monsour outlined some of the city’s accomplishments, including the board’s work to keep the city financially sound.

“It has been an honor to serve as the South Ward alderman for the city of Vicksburg for the last four years,” Monsour wrote in a letter announcing his decision to run for re-election. “Since 2017, the city of Vicksburg has been involved in bringing 10 major projects to Warren County. The result of these 10 projects has brought over $148 million of investment to our city and county of close to $210 million.”

Monsour said the board has been involved with other projects such as Sports Force Parks on the Mississippi, MCITy and the South Frontage Road expansion and balanced the city’s budget despite the effects of COVID-19.

“I hope that I have earned your trust and support … so that I may continue working to make Vicksburg a place where you, I, our children and grandchildren can live, work and prosper,” Monsur said.