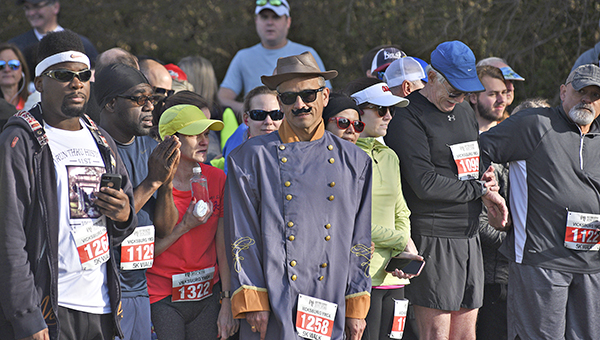 Nestor Raul Anzola waits for the start of the 5k race walk during the 2020 Run Thru History at the Vicksburg National Military Park. This year’s edition will go on as scheduled, but with a different course because of COVID-19 restrictions. (Courtland Wells/The Vicksburg Post)

Run Thru History leaves VNMP for 2021

The COVID-19 pandemic will not stop one of Vicksburg’s annual rites of spring, but will give it a much different look this year.

For the first time in its 42-year history, the Run Thru History will not be contested inside the Vicksburg National Military Park. It will instead follow a course on the western edge of town that begins and ends at WaterView Casino.

Race director Phillip Doiron said the course change is a one-year move caused by the pandemic. Organizers were unsure if federal guidelines restricting public events on National Park Service land would be loosened by the race date of March 6, and they wanted to ensure the event could go on as scheduled.

“It’s totally a COVID thing. The Military Park has been a great partner, but they have some very strict rules on what has to happen for events to happen on their property,” Doiron said. “As a race committee, we got nervous that we couldn’t meet that. We can run a race in a safe manner, but we didn’t want the rug pulled out from under us at the last minute.”

With the availability of the VNMP uncertain, Doiron and the Run Thru History organizing committee turned to another major partner and sponsor — WaterView Casino.

The casino on Washington Street will serve as the start and end points of the race, as well as host registration events on March 5 and 6. Doiron called WaterView “a great partner” for stepping forward, and said it also spoke to the status and goodwill the Run Thru History has built up over its first 40-plus years.

“That speaks to what the people who have come before us have done. Not every race could pull up stakes from one venue and find another one just like that,” Doiron said. “I like to think people see the Run Thru History as a rite of spring and see it as an important event.”

The new 10K run course will begin at WaterView Casino, and head south for a quarter-mile before turning left onto North Frontage Road. A half-mile later, runners and walkers will make another left turn onto Confederate Avenue.

After 2.4 miles on Confederate Avenue, the course turns onto Wisconsin Avenue for about a half-mile. Runners and walkers will turn around at the Wisconsin Avenue I-20 overpass bridge and then follow the same route back to the finish.

The 5K race walk course follows the same route, except the turnaround point is at the AmeriCorps headquarters on Confederate Avenue.

The two courses are mostly flat in the middle, although there is a roughly 150-foot elevation change from the lowest point to the highest.

While the new course is on the opposite side of town from the VNMP, Doiron said it was selected to keep the race’s theme of honoring the history of the Siege of Vicksburg. Runners and walkers will pass by positions held by Confederate artillery batteries at the start of the race and through the lines of the Confederate army for the bulk of the race. The phrase “Run the Batteries,” a reference to the term for advancing boats past the riverfront artillery, is on the race’s registration form.

“Confederate Avenue still follows the siege lines, so we wanted to incorporate that,” Doiron said. “We tried to focus more on the history that you’re running by. Since we’re off-campus, so to speak, we’re really going to focus on the role those river batteries played.”

Like other races during the COVID-19 era, Doiron said other procedures will be in place to ensure the safety of runners, walkers and volunteers. All will be required to wear a mask, a wave start will be used for both races, and race day registration and packet pickup will be held outdoors in a tent. A spaghetti dinner traditionally held the night before the race has been canceled.

Doiron also stressed that the course change is — hopefully — just for 2021, and the plan is to return to the VNMP in 2022.

“It is a one-year deal. It’ll enable us to have the race. We couldn’t miss a year,” Doiron said. “We know how much the Park is doing for us and we understand what they’re facing. The race is going on as normal. We do expect some restrictions, but we’re going to have a good time.”

A little rain did not deter those who had lined up outside the doors of the Jackson-Hinds Vicksburg -Warren Family... read more