‘It is bogus’: Officials don’t know what D.C. group is trying to accomplish 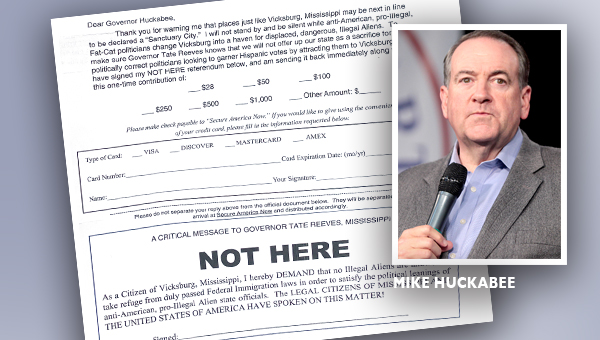 A mailout hitting mailboxes in and around Vicksburg from a conservative political action committee based in Washington D.C. claims the city is just days away from being declared a “sanctuary city.”

The letter also requests donations to the group to help fight the city from being considered a place where illegal aliens can find safe haven from criminal prosecution.

“I really do not know where this is coming from. It is bogus,” South Ward Alderman Alex Monsour said Saturday after getting calls from constituents alerting him to the letter and the claims it contains. “I do not know what this group is trying to do, what they are trying to accomplish. All I know is that Vicksburg will not become a sanctuary city as long as I have any vote on the Board of Mayor and Aldermen.”

The group — Save America Now — has among its leadership former Arkansas governor and presidential candidate Mike Huckabee.

On its website, the group says that it was “Born in grassroots and matured on the internet, we are now a nationwide army of Democrats, Republicans, Independents, conservatives and liberals who share a common concern about our security and our liberty.”

In the letter, the group claims that “Vicksburg, Mississippi may be next in line to be declared a ‘Sanctuary City.” It asks for contributions, ranging from $28 to $1,000 to lobby Gov. Tate Reeves to prevent such a declaration from being made.

By contributing, the group says they make sure Reeves receives the following messages from local residents.

“As A Citizen of Vicksburg, Mississippi, I hereby DEMAND that no Illegal Aliens are allowed to take refuge from duly passed Federal Immigration laws in order to satisfy the political leanings of anti-American, pro-Illegal Alien state officials. The LEGAL CITIZENS OF MISSISSIPPI AND THE UNITED STATES OF AMERICA HAVE SPOKEN ON THIS MATTER!”

“I do not know anything about this group, or why they would be sending this out now,” Monsour said. “There has never been any discussion by members of the board about this matter at all.”

The organization, which was founded in 2010, is classified as a non-partisan 501(c)4 nonprofit organization. By law, the organization does not have to disclose any of its contributors.