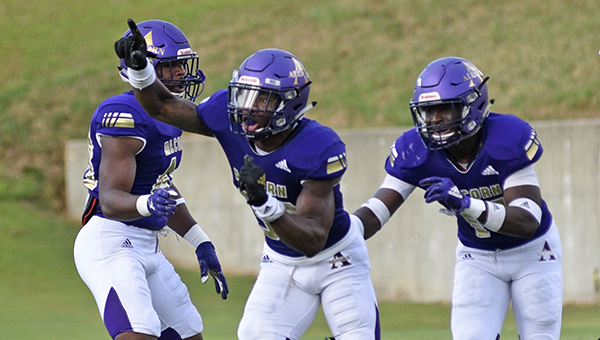 Alcorn State's Qwynnterrio Cole (32) celebrates after catching an interception against Prairie View A&M in a game in 2019. Alcorn did not play in 2020 because of COVID-19, but will play a spring season beginning in late February. (Courtland Wells/The Vicksburg Post)

There’s an old joke in the South that there are two seasons — football, and spring football. Thanks to COVID-19, that will actually be true in 2021.

Just as we finish digesting Alabama’s latest national championship run, and the NFL playoffs wrap up with Super Bowl LV, the sports world will embark on an unprecedented second college football season beginning in February.

Delta State will conduct spring practice, but not games, and will instead wait until September to see live action once again.

The Southwestern Athletic Conference, which includes Mississippi schools Alcorn State, Jackson State and Mississippi Valley State, has an ambitious plan for a six-game league schedule starting Feb. 27 and finishing with the conference championship game on May 1.

A true national championship might not be at stake at any of the various levels of college football. Members of the powerful Division II Gulf South Conference, for example, will not play an organized league schedule and is allowing teams to opt out if they so choose. The teams and conferences that are playing also are not the highest levels of the sport.

It will still be fascinating, however, to see how the sports world reacts to meaningful spring football and to see just how far we’ve come when it comes to sports co-existing with the COVID-19 virus.

Will we treat it like an afterthought, as so often happens in the fall when FCS, D-II and D-III games get lost in the wake of the top-tier Football Bowl Subdivision? How many fans will be allowed to attend to create not only a festive atmosphere, but also badly-needed revenue for these programs? Will they attend at all, or will they be burned out on football after a full college and NFL season?

How many players at small schools follow the example of some of their FBS counterparts by opting out over concerns about COVID-19?

Given how many FBS games were canceled or postponed in the fall, how will leagues and teams handle testing and the constant schedule adjustments that will ensue from outbreaks on various campuses?

It’s all a bit of a novel experiment. The questions we thought we had answered through trial and error over the past six months could help refine processes for teams and fans, or they could only raise new ones as we move forward.

No matter what happens, this one-off spring football season will be a reality instead of a punchline, and a spectacle to behold.

The Vicksburg Post welcomes your items for the Game Plan. Submit items by email sports@vicksburgpost.com and include the name and... read more