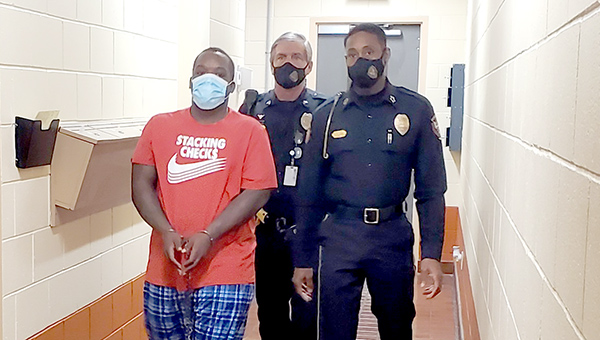 James Earl Winters, 27, of Vicksburg, wanted in connection to the Oct. 6 murder of Wade Carter, made his first appearance in court Thursday, where he was formally charged.

During the hearing in Vicksburg Municipal Court, Winters was charged with murder, aggravated assault with a firearm and felon in possession of a firearm. Judge Angela Carpenter placed a $2 million bond on Winters. But, even with the bond set, Winters will not be released, as a hold was placed on him by the Mississippi Department of Corrections.

She was arrested Wednesday as well and charged with hindering prosecution for her role in helping Winters avoid arrest for more than three months.

Carpenter placed a $200,000 bond on Wells and bound her case over to the grand jury.

According to the Vicksburg Police Department, its officers, in cooperation with deputies of the Warren County Sheriff’s Office, executed a warrant at an address on Los Colinas Drive shortly after 2 p.m. Wednesday. Winters was found inside the home.

Winters has been on the run from law enforcement since Oct. 6, when he allegedly shot and killed Carter Jr., 31, in the parking lot of LD’s Bar and Lounge, 1111 Mulberry Street.

Carter was shot twice in the abdomen during the incident that occurred just after 11 p.m. on Oct. 6. He died three days later, becoming the eighth homicide victim in Vicksburg in 2020.

A security guard working at LD’s was also shot in the leg. A third person arrived at Merit Health River Region’s emergency room by personal vehicle with a gunshot wound.

Winters was quickly identified as a suspect, but was not captured until Wednesday.

A man wanted in connection to a fatal shooting in October has been captured. According to the Vicksburg Police Department,... read more