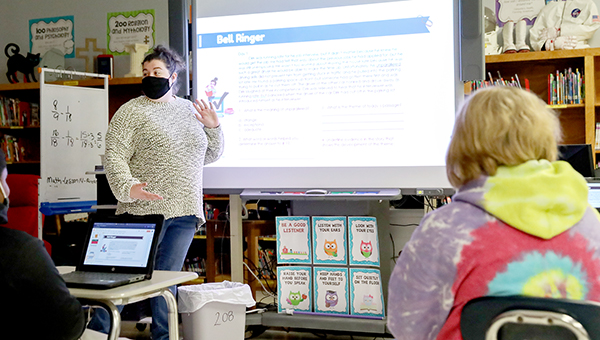 Catherine Whittington, a sixth-grade English Language Arts teacher at Beechwood Elementary School, goes over a lesson with her students. Whittington is a finalist for the Vicksburg-Warren Chamber of Commerce's Educator of the Year Award. (Marcus Allen/Vicksburg Warren School District)

Teaching is all about relationships for Beechwood Elementary’s Catherine Whittington. Now in her eighth year of teaching, Whittington said the relationships she builds with students is crucial in her role as a teacher and their development.

“I teach because I love students and to watch students learn and grown,” Whittington, a sixth-grade English Language Arts teacher at Beechwood, said.

Whittington is a finalist for the Vicksburg-Warren County Chamber of Commerce’s Educator of the Year award. She began her teaching career in 2012 with the Vicksburg Warren School District as a fifth-grade math teacher at Beechwood. She began teaching ELA in sixth grade in 2015.

Whittington earned her bachelor’s degree in elementary education in 2012 from Delta State University. She later earned her masters in educational theories and practices from Arkansas State in 2014.

Whittington said one of the most rewarding moments in her career, and one that helped strengthen her teaching philosophy, came while teaching fifth-grade math.

“One of my most moving experiences as a teacher came a few years ago from a student who I taught math in fifth grade. She really struggled in math and I stayed with her multiple times during breaks and even recess to work on skills,” Whittington wrote in her Educator of the Year application. “It was so rewarding to watch her work so hard to improve and how excited she was when she understood a new skill. A few years later, she emailed me thanking me saying that I really helped her by just taking the time with her to make sure she understood.

“My favorite part of teaching is building relationships with my students, like this one, and watching them learn and grow.”