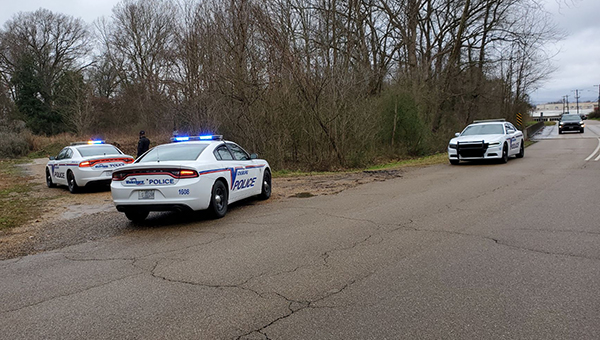 Officers with the Vicksburg Police Department have converged on the area near Belva Drive and Bayout Boulevard. Law enforcement officials are searching for suspects who jumped from a stolen vehicle. (John Surratt/The Vicksburg Post)

Officers with the Vicksburg Police Department and the Warren County Sheriff’s Office Saturday afternoon were searching for suspects who bailed out of a vehicle on Belva Drive about 4 p.m. Saturday..

According to officials, officers spotted a vehicle on Belva Drive that was reported stolen. When officers attempted to stop the vehicle, the occupants jumped from the car — a grey SUV — that then collided with a van at Warrenton Independent Baptist Church and came to a stop in the wood line.

The occupants fled on foot through the woods in the area around Bayou Boulevard. One of the three reports individuals was later captured.

In addition to officers and deputies, K-9 officers were deployed in the area to help in the search.