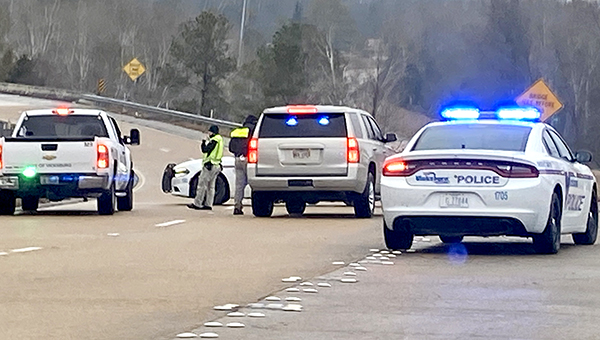 A Vicksburg fire truck responding to a wreck near Interstate 20 Friday morning was damaged when it hit a patch of ice and struck the sidewall of the bridge.

It was damaged again when the responding wrecker also hit a patch of ice and struck the back of the fire truck.

The initial call came at 7:33 a.m. for an overturned 18-wheeler on the on-ramp from U.S. 61 South onto Interstate 20 westbound.

Freezing temperatures and rain have created hazardous conditions in parts of Warren County. It has not been confirmed that ice on the on-ramp was the cause of the 18-wheeler accident.

The fire truck — a 1993 pumper — responding as Engine 7, is the oldest pumper in the fire department’s fleet and is a back-up vehicle. It was in use as the other engine was being serviced.

Fire Chief Craig Danczyk said the wreck, which did not result in any injuries, may have been the final call for this truck.

“It has been a good one, but it is at the end of its useful life,” Danczyk said. “We will have to see the extent of the damage, and depending on the cost, we may decide not to repair it. The useful life of a truck like this is about 20 years. We have had this one for 28 years, so it appears that we are closer to the end after today.”

The fire department responded with Rescue, Engine 7 and an ambulance. Danczyk said the Vicksburg Police Department did arrive on the scene and advised of slick conditions but that did not prevent the fire truck from hitting the ice.

Wilson thankful for the path that led him into education