Emergency officials ahead of winter storm: Pray for the best, prepare for the worst 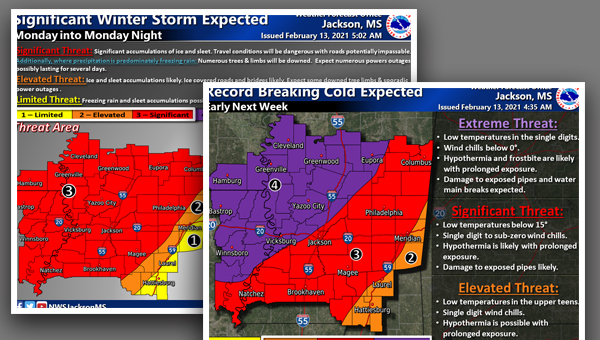 It is simple. Stay home.

The winter storm, forecast to roll through Warren County late Sunday into Monday, is being considered a dangerous event — so much so that emergency officials are urging residents to prepare now to remain home beginning Sunday and into Tuesday.

According to the National Weather Service in Jackson, Warren County — and much of central Mississippi through the Delta — should expect “significant accumulation of ice and sleet. Travel conditions will be dangerous with road potentially impassable,” the warning from the Weather Service said. “Additionally, where precipitation is predominately freezing rain: numerous trees and limbs will be downed. Expect numerous power outages, possibly lasting days.”

Weather officials also warned residents to expect low temperatures Monday in the single digits, with wind chills below zero. The service also said hypothermia and frostbite are likely with “prolonged exposure” and “damage to exposed pipes and water main breaks are expected.”

“We had issues Friday night from icing. That was just a precursor of what is predicted to be here Sunday and Monday,” Pace said. “My plea to the public is to stay home if you do not absolutely need to get out. If you do have to get out, please be careful. Drive slowly, approach bridges and overpasses with caution and remember to not brake or accelerate on icy bridges.”

While not near the severity of what is expected in the coming days, Friday’s weather, sadly, did prove to be deadly.

While responding to an accident that had already occurred at mile marker 11 on Interstate 20 westbound, local tow truck operator George Spratley Jr., 44, was killed when another vehicle, traveling near the accident, lost control on the icy roadway and collided with Spratley’s tow truck.

According to the Mississippi Highway Patrol, Spratley, a Bovina resident, died as a result of his injuries.

“I had the opportunity to work alongside Spratley for many years. He was always very professional, efficient and a pleasure to work with,” Pace said. “He will be missed both professionally and personally.”

Pace said Spratley’s death, along with the numerous accidents that already took place in less severe conditions than what is forecast for Sunday and Monday, should serve as a reminder of how serious local residents should take this impending storm.

Entergy Mississippi said it is expecting the winter storm to impact all of its 45-county service area.

“We continually watch the weather and put our plan in action as soon as a severe weather threat emerges,” said Lea Turnipseed, Entergy Mississippi vice president of customer service. “We encourage customers to form a storm-preparedness plan before severe weather appears. Waiting until a storm arrives may be too late.”

Pace said his department has already taken additional steps to prepare for the storm’s arrival.

“All of our vehicles are fueled and serviced, all days off have been canceled,” Pace said. “We will have extra manpower out throughout the weekend and into next week. All we can do now is pray for the best and prepare for the worst.”