Officials urge residents to ‘hunker down’ ahead of severe winter storm 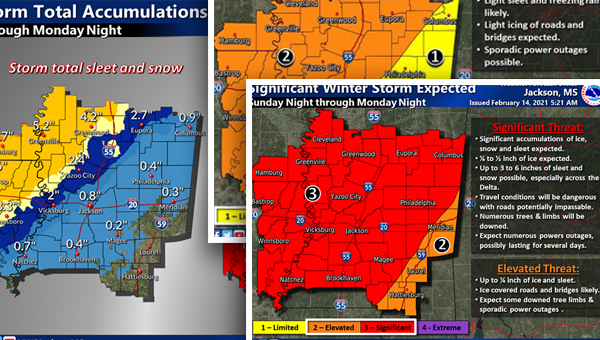 “All we can do now is hunker down, stay safe and stay warm,” Mayor George Flaggs Jr. said as Vicksburg and Warren County make final preparations ahead of a significant winter storm expected to roll through Sunday and Monday.

“I have been in touch with the road department, the police department, and other agencies,” Flaggs said. “We are ready and all we can do now is wait.”

City, county and state officials now must wait to see just how bad this storm — which is expected to bring bitterly cold temperatures, nearly a half-inch of ice and 3-to-6 inches of sleet and snow — moves closer.

Warren County remains under a winter storm warning issued by the National Weather Service through at least Tuesday, with temperatures not expected to rise above freezing until sometime Wednesday.

Saturday, Vicksburg set a record when the high temperature only reached 34 degrees. The previous record for the lowest high temperature on Feb. 13 was 39 degrees set in 2010. Other records are in danger of being broken in the coming days, as some forecasts call for low temperatures in single digits.

Mississippi Department of Transportation Mike Flood said this storm is “the real deal.”

“Once this storm hits we are urging residents stay off the highways, emergency vehicle traffic only,” Flood said. “If you need to get something, do it before the storm hits.”

Flood said that MDOT crews have been on state highways since Wednesday pre-treating roads, overpasses and bridges ahead of this storm.

“This is what we prepare for,” he said. “We currently have more than 200 employees in the Jackson metro area pretreating with salt, slag and sand, and will continue to do so until it becomes too dangerous. Our crews are working 12 hours shifts and will likely be doing so through Wednesday when temperatures get back above freezing.”

Flood said crews are using more sand and slag — a mixture that includes crushed asphalt to increase traction — for this storm, because the forecast calls for more freezing rain.

At this point, the only silver lining is that Monday — for some — is a national holiday, which will decrease the number of people heading to work. Flaggs said city employees have the day off Monday and city leaders will determine whether or not to have those employees return to work during a meeting Tuesday at 4 a.m.

Dr. Jeff Holland, president of the Warren County Board of Supervisors, said all county offices — including the Warren County Courthouse — are already scheduled to be closed Monday due to the Presidents Day holiday, and — just like the city — officials will decide later whether or not to extend those closures, and time off for employees, into Tuesday.

Saturday, officials with the Vicksburg Warren School District announced schools will be closed Monday and Tuesday. Vicksburg Catholic School, which was already scheduled to be out Monday for the holiday, announced Saturday classes on Tuesday would be virtual-only. Porter’s Chapel Academy, also scheduled to be out Monday, will now remain closed Tuesday.

Evelyn Bumpers, director of NRoute, said the transit system, which has been by appointment only during the COVID-19 pandemic, was already scheduled to be closed Monday due to the holiday. She said if conditions Tuesday remain dangerous, then those with Tuesday appointments will be notified.