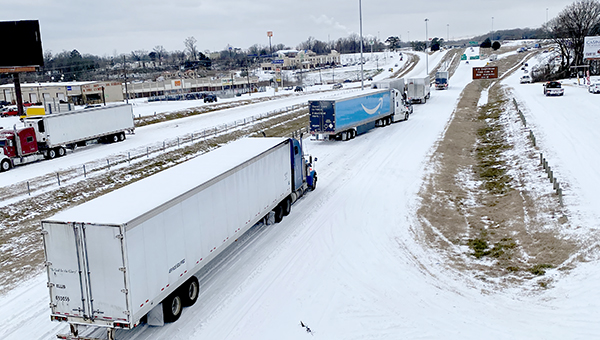 A number of 18-wheelers are seen stalled on Interstate 20 westbound Monday afternoon near the Wisconsin Avenue overpass. (Submitted Photo)

For more than 24 hours, Vicksburg and Warren County have been under attack from a severe winter storm that many say is the worst they can remember.

Portions of Interstate 20 were closed for part of Monday, as 18-wheelers were stranded at the bottom of a hill, unable to navigate iced-over roads.

The city of Vicksburg’s vehicle maintenance department broke out the rarely-used snow chains that allow police cars and fire trucks to respond to emergencies and navigate the hills and roads in Vicksburg.

“I have never seen winter weather like this in Vicksburg. It’s bad,” Elfer said. “There are stalled out vehicles everywhere. In some cases, people simply got out of their vehicles, left them where they were and walked home.”

In addition to getting crucial medical personnel to and from work, Elfer said he and others have helped workers stuck at their location of employment to get home.

“Never have I seen it like this. I have been doing this job for 20 years and this is the worst I have seen it,” Vicksburg Police Chief Milton Moore said. “My guys are doing the best they can. We have been running since before dawn responding to calls all over town.”

In response to the number of calls emergency officials were seeing on city streets, Flaggs ordered a 24-hour curfew beginning at noon. The goal, Flaggs said, was to remove as many vehicles from the streets as possible, giving emergency vehicles the best opportunity to respond to emergencies and cut down the number of drivers stranded.

“The curfew helped out tremendously,” Moore said. “It kept a lot of traffic off the roads later in the day.”

The weather system that forced most Warren County residents inside their homes dropped as much as four inches of frozen precipitation on the area from Sunday night into Monday afternoon.

“Most of that was sleet, but we had some snow and freezing rain mixed with it,” said Logan Poole, a meteorologist with the National Weather Service Office in Jackson. He said the system has moved out of the area but cold temperatures will remain in the area and are predicted to be below 10 degrees. “It will get very cold,” he said.

Both Flaggs and Holland said reopening plans would be determined later and would depend on the severity of road conditions in the area. Temperatures are forecast to remain below freezing until Wednesday afternoon when another winter storm will move in. Some areas of Central Mississippi will see mostly rain from the next system, but there is a possibility of more wintry precipitation.

The early hours of the current winter storm proved destructive, as a late Sunday night fire broke out at the Oyo Hotel on South Frontage Road and caused severe damage.

Vicksburg Fire Chief Craig Danczyk said a large portion of the middle section of the hotel was significantly damaged by a fire that appears to have started in one hotel room as the result of a candle burning.

In responding to the fire in extremely low temperatures and icy conditions, Danczyk said some firefighters suffered slip-and-fall injuries. No one in the hotel at the time of the fire was injured.

For that particular shift, it marked the third fire to which the department responded. The other two were a house fire on Hossley Road Sunday afternoon and then a smaller, air conditioner fire on Belva Drive.

Monday morning, fire units were out again, battling a fire on West Magnolia Street, just off Cherry Street. The fire, which damaged a home, presented firefighters the challenge of having to navigate a steep, icy incline that emergency vehicles could not get up. Dancyzk said firefighters utilized different techniques to get to the fire and keep it from spreading to nearby homes.

Later in the day, the fire department’s fleet of vehicles was outfitted with snow chains to help them traverse the icy roads. The chains, however, limited the vehicles’ speed to less than 20 mph and cut the department’s response time.

Still, it was the trapped motorists and motor vehicle accidents that required the most attention from first responders.

“We’ve been responding to calls for service,” Warren County Sheriff Martin Pace said. “We’ve been taking people home or to work if their car has run off the road and gotten stuck.

“We have not had any major injuries and we’ve had mostly light traffic,” he said. “It looks like everybody has heeded the warnings and is staying off the roads. The road conditions are bad; we have several inches of snow and sleet on the roads.”

Pace said the area was fortunate the precipitation was mostly sleet and snow with little freezing rain.

“Freezing rain would have brought trees down,” he said.

As for Interstate 20, it remained open Monday evening, but still dangerous. Mike Flood, a spokesperson with the Mississippi Department of Transportation, said a portion of the interstate — from exit 3 (Indiana Avenue) to the Mississippi River Bridge — was closed at noon Monday, but reopened later.

Entergy customer service representative Sheila McKinnis said power has been restored to about 45 customers in the area around Oak and Pearl Streets and no other outages have been reported.

“Warren County looks really good; we don’t have anything out right now,” she said.

Vicksburg Public Works Director Garnet Van Norman said city crews were up most of the night Sunday and into Monday sanding and slagging streets and bridges.

“So far waterlines are doing fine,” Van Norman said, adding he is concerned about the service lines branching off the main waterline.

“If it will stop sleeting and snowing and freezing rain, we’ll be all right,” he said. “We’re on top of it and we’re doing all we can do.”

Flaggs, who Monday afternoon was helping transport medical personnel to and from Merit Health River Region, said he was tremendously proud of the city employees and first responders in responding to the winter storm.

“I could not ask for any better from our city employees, the gas department, the water department, traffic, first responders. They all did a tremendous job in hard conditions,” Flaggs said. “Everyone stepped up. I’ve never seen anything like this in my lifetime in Vicksburg.”

Waste Management announced Monday afternoon that it was extending the suspension of all garbage and trash collection service in Vicksburg... read more