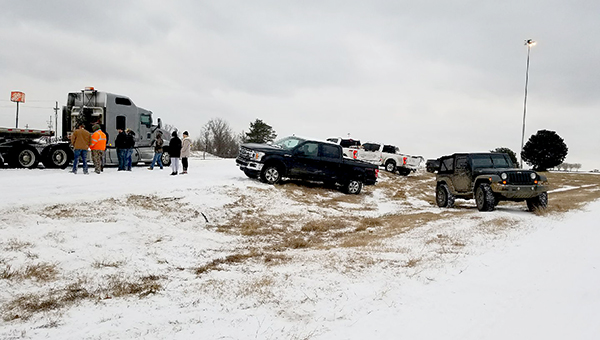 Residents come alongside stranded 18-wheelers on Interstate 20 to help the trucks get on their way. (Vicksburg Police Department photo)

Even as crews work to free stalled vehicles throughout the community, apply more sand and slag to make more roads passable, there is one eye set on the horizon.

After days of ice and snow, and frigid temperatures well below freezing, Warren County is bracing itself for yet another round of severe winter weather.

According to the National Weather Service, another system is set to roll through the area late Wednesday that could bring more freezing rain, sleet and maybe snow.

“If the temperature is above freezing, we can expect rain, if it’s below freezing we’ll have ice. It’s going to be close,” National Weather Service meteorologist Logan Poole said. Presently, he said, the Upper Delta is most at risk for freezing rain, “But that could move south.”

“This could be an ice event,” Warren County Emergency Management Director John Elfer said. This is going to be bad.”

The initial round of winter weather from late Sunday into Tuesday brought more than 4 inches of wintry mix — mostly ice — with a topping of some snow Tuesday morning. The combination of temperatures near single digits and ice made roads throughout the region treacherous.

As of 4 p.m. Tuesday, only one lane of traffic was open on Interstate 20 eastbound and another lane westbound. This was made possible by hours of work by emergency crews and teams with the Mississippi Department of Transportation to clear some of the ice and help stranded 18-wheelers get moving once again..

But even as temperatures have plummeted and the number of emergency calls skyrocket, Elfer said the collaboration between state and local agencies has “been the best I have ever seen.”

These frigid forecasts have called for a number of cancellations — most notably in-person classes for public and private schools for Wednesday — and an extension of a city-wide curfew to keep streets clear for emergency vehicles.

The United States Postal Carrier’s creed is “Neither snow nor rain nor heat nor gloom of night stays these couriers from the swift completion of their appointed rounds.”

There’s now the next line … “except when it is a severe winter storm in Vicksburg, Mississippi, that brings 5-to-6 inches of ice and snow.”

Tuesday, the United States Postal Service announced mail delivery in Vicksburg, Warren County and some other areas in central Mississippi has been suspended due to dangerous road conditions.

“We apologize for any inconvenience customers may experience, but safety of both customers and employees comes first,” the Postal Service said in its announcement.

The city of Vicksburg’s curfew, which was put in place to keep city streets open for first responders, has been extended.

In a statement Tuesday morning, Flaggs announced the curfew, which was set to expire at noon Tuesday, has been extended to noon Wednesday.

“The safety of our citizens remains my top priority throughout this severe winter weather event,” Flaggs said. “Our first responders must be able to travel our streets as needed — implementing this curfew will assist in their efforts. Please stay home and stay safe.”

Exceptions to this curfew include all emergency vehicles, persons traveling to or from work, or persons seeking emergency medical attention.

Waste Management announced late Monday it was extending the suspension of all garbage and trash collection services in Vicksburg and Warren County due to dangerous winter weather conditions and road closures.

The company — which services homes and many businesses within Vicksburg and Warren County — said service would resume “when road conditions are deemed safe to travel.”

The Vicksburg Warren School District has announced that schools will remain closed Wednesday due to the ongoing winter storm and dangerous road conditions.

“Schools and offices of the Vicksburg Warren School District will remain closed on Wednesday, Feb. 17, 2021, due to extreme low temperatures and dangerous road conditions,” the District said in its announcement. “Student meals will not be delivered on Wednesday. More wintry weather is forecast for later this week and we will provide updates as they are available. All are encouraged to stay off the roads if possible.”

“Due to extreme low temperatures and dangerous road conditions, VCS will continue distance learning for Wednesday,” the school said. “We will provide updates as we monitor the situation for the remainder of the week. Please stay warm and please stay off the roads unless it is an emergency.”

Vicksburg Fire Chief Craig Danczyk was at a major structure fire late Sunday night. He was at another early Monday morning. In between, Danczyk was helping transport department personnel, who were unable to navigate the icy roads, get to work.

“It’s shift change right now and we are just trying to piece together personnel,” Danczyk said Monday, as he was answering phones at Central Fire Station with one ear and listening to the dispatch calls of his team responding to a morning house fire on West Magnolia Street.

In addition, Danczyk was getting reports as vehicle maintenance teams were working to install snow chains — yes, snow chains — on many of the department’s fleet to help improve the response time in dangerous driving conditions.

“We have enough accumulation on the ground now to where we can install the tire chains on our fire apparatus,” Danczyk said. “Doing so will greatly reduce our speed to 20 miles per hour or less — probably 15 miles per hour — but it is necessary for us to navigate the hills, climb these streets, especially the brick streets around downtown. They are far more treacherous than the concrete or asphalt streets when it gets icy.”

The department had difficulties early Monday in responding to the fire on West Magnolia Street. Given the steep incline, firefighters were forced to use different techniques, Danczyk said, to get water on the fire.

Vicksburg resident Bryan Curtis posted a video on Facebook showing the house fire and the difficulty fire units had in responding.

The early hours of the winter storm proved destructive, as a late Sunday night fire broke out at the Oyo Hotel on South Frontage Road and caused severe damage.

Danczyk said a large portion of the middle section of the hotel was significantly damaged by a fire that appears to have started in one hotel room as the result of a candle burning.

In responding to the fire in extremely low temperatures and icy conditions, Danczyk said some firefighters suffered slip-and-fall injuries. No one in the hotel at the time of the fire was injured.

For that particular shift, it marked the third fire to which the department responded. The other two were a house fire on Hossley Road Sunday afternoon and then a smaller air conditioner fire on Belva Drive.

Elfer said continued poor conditions will again force the rescheduling of appointments at the county’s drive-thru COVID-19 vaccination site through at least Wednesday.

Winter weather has already forced the rescheduling of an estimated 400 from last Friday and another 400 appointments from Monday’s schedule. Wednesday would have seen 400 more appointments.

Now, all of those appointments have been moved to either Friday or Saturday.

Elfer said those who were scheduled to receive their vaccine last Friday, Monday or Wednesday, should check their appointment status with the Mississippi State Department of Health.

The lingering ice and snow, combined with cold temperatures, has forced some local churches to suspend, postpone or modify their traditional Ash Wednesday services that mark the beginning of Lent.

The Rev. Sam Godfrey, rector of Christ Episcopal Church, said he will host two services Wednesday, both of which will be live-streamed on the church’s Facebook page at www.facebook.com/christchurchvicksburg1.

“I will live-stream the services at 12:15 p.m. and 5:30 p.m. Wednesday,” Godfrey said. “This will be the traditional Ash Wednesday service with Eucharist.”

The Rev. Andy Andrews, the rector of the Church of the Holy Trinity, said he will be at the church Wednesday at 7:15 a.m. for Ash Wednesday services. People are welcomed to attend the service, which will also be streamed live.

St. Alban’s Episcopal Church will not host in-person services, but will hold two services that will be live-streamed, the Rev. Elisabeth Malphurs, the priest in charge, said.

“We will have a service at noon that will be broadcast on Zoom and a 6 p.m. service on our Facebook page,” she said, adding people can either email or call the church for the Zoom link.

“The roads here in Bovina are in such bad shape, and we have more bad weather coming that we decided not to have in-person services,” Malphurs added.