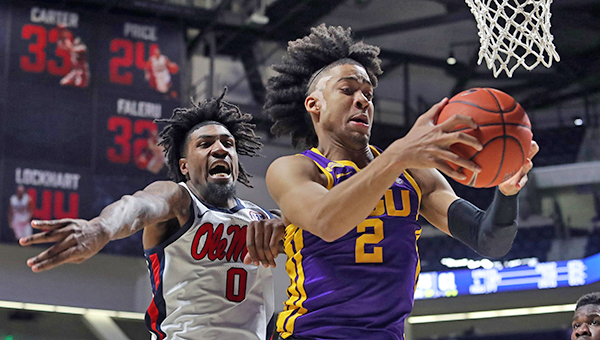 LSU’s Trendon Watford (2) grabs a rebound in front of Ole Miss’ Romello White (0) during their game in Oxford in January. The Tigers and Rebels were supposed to play again Thursday, but that game was postponed because of the winter storm striking Mississippi. (Petre Thomas/Ole Miss Athletics)

The men’s basketball game between LSU and Ole Miss was canceled Wednesday, just a few days after it was added to the schedule, because of the effects of a prolonged winter storm system plaguing Mississippi this week.

The game was originally scheduled for Wednesday as a COVID-19 makeup game, then postponed until Thursday afternoon, before being canceled altogether due to icy weather and treacherous travel conditions. It is unclear if the game will be rescheduled.

The Rebels and Tigers were not alone, however. A total of seven men’s and women’s basketball games scheduled for Thursday were postponed with no makeup dates announced.

On the men’s side, Mississippi State’s road game at Auburn and Alabama at Texas A&M were also postponed. Both games had originally been scheduled for earlier this week and moved to Thursday before being postponed again.

Ole Miss and Mississippi State are scheduled to play each other Saturday at 5 p.m. in Oxford.

Four women’s games were postponed as well — Ole Miss at Arkansas; Auburn at Mississippi State; LSU at Kentucky; and Missouri at Texas A&M.

The icy weather has also pushed the start of the college baseball season back one day. Ole Miss and Mississippi State are both slated to participate in the State Farm College Baseball Showdown in Arlington, Texas, and it has shifted to a Saturday-Sunday-Monday schedule.

Mississippi State will play Texas on Saturday, TCU on Sunday and Texas Tech on Monday, with all three games beginning at 11 a.m.

Ole Miss will play TCU Saturday at 3 p.m., Texas Tech Sunday at 3 p.m., and Texas Monday at 2:30 p.m. All games are at Globe Life Park, the home of Major League Baseball’s Texas Rangers.

Southern Miss also announced it is postponing its baseball season opener against Northwestern State by one day. The teams will play a doubleheader Saturday, beginning at noon, at Pete Taylor Park in Hattiesburg. Both games are scheduled for nine innings. The series finale is Sunday at 1 p.m.

Richard Price, who overcame a humble upbringing in Vicksburg to become one of the best football players in Ole Miss... read more