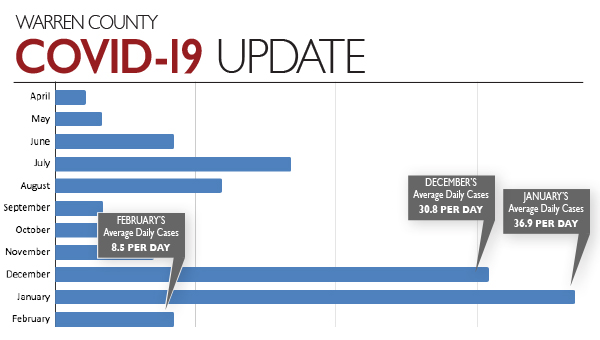 It appears that Vicksburg and Warren County are finally over the COVID-19 surge that ignited over the Thanksgiving, Christmas and New Year’s holidays.

On average, Warren County had an average of 8.5 new cases reported per day, which is about a quarter of what was reported per day in January (36.9) and December (30.8). February’s totals — and those in early March — might have been lowered by the severe winter storm that struck Warren County in the middle of the month. With roads covered in ice and temperatures below freezing for five full days, the storm virtually shut down the county and forced many people to shelter-in-place.

“We believe that we are on the backside of the last spike and hopefully will continue to see improvement,” said Dr. Dan Edney, with Medical Associates of Vicksburg. Edney is also a member of the governor’s COVID-19 task force. “The ice storm did cause a mini-shut down which should be beneficial and it also helps the number of those vaccinated continues to climb every day.”

Edney said what is also happening is that more people — and their families — have at this point had direct contact with someone who has battled the virus.

“I think that most folks are having more of a direct impact from COVID from people they know and care about, and are learning how to live safely now,” he said.

In addition to the lower numbers in February, the county saw its 14-day case total and ratios of those with the virus fall below the state’s thresholds of being considered a virus hot spot.

Both the city and county have extended their COVID-19 civil emergency orders, which require masks or face coverings to be worn inside all businesses and public buildings.

A fight between two rival rap groups Saturday night at a Pattison bar resulted in the shooting death of two... read more