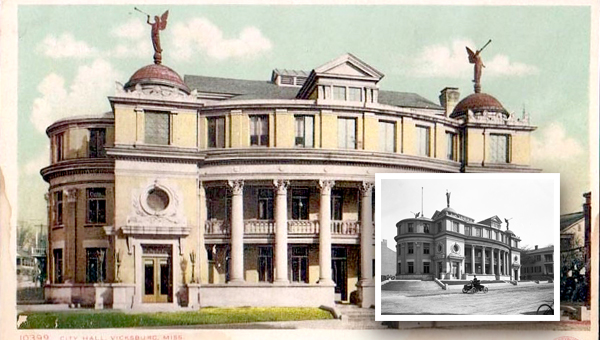 For nearly 70 years, there has been a mystery that has gone unsolved in Vicksburg.

Rather than a “who done it,” this mystery is a “where did they go?”

On Dec. 5, 1953, Vicksburg was ravaged by a deadly tornado that swept through portions of downtown. The tornado, which struck the city at 5:35 p.m., cut a path 500 yards wide and seven miles long. It killed 38 people, injured 270 more, and left nearly 1,200 homeless. Damage estimates at the time totaled $25 million.

But through the cleanup and recovery, there started to be a question of “where did they go?”

The “they” in this setting was the trumpeting angels — or rather heralds — that once adorned the top of Vicksburg’s city hall.

In the midst of the storm, the high winds reportedly swept the heralds from atop their perch. To where remains the mystery.

“Well, that is a very good question,” said Nancy Bell, executive director of the Vicksburg Foundation for Historic Preservation. “They were taken, or flew off, or were damaged, and supposedly someone has them, but I have been here 38 years and I have not found them yet. I really don’t know where they went.”

Long rumored to have been taken by someone to one day be refurbished and placed back atop City Hall, the angels have never been found.

“It does make for a good mystery. The perfect thing would be is that someone buys a house and they find them in the attic. That would be the perfect thing,” Bell said. “Wouldn’t that be something? And even if they are damaged and in pieces, at least they could be displayed and shared in some way. That would be so cool as an exhibit.”

During the administration of former Vicksburg Mayor Laurence Leyens, in 2001, Bell’s organization worked with city hall to seek companies and bids for possibly replacing the heralding angels.

At the time, Vicksburg architect David Clement worked with the team and determined the heralding angels were 10-feet tall to the tip of the wings. Bell said estimates for heralds that were “like” the ones missing were around $4,000 each. But, to have ones designed to look like the originals would have been “quite a bit more.”

“We worked with the city on it, actually got some names of companies who could remake them. We got some bids back and it was ridiculous,” she said. “It was just not something that made financial sense. The cost was just too much.”

Still, more likely than not, the angels, displaced and damaged in the historic tornado, are at the bottom of the pile of debris collected.

“There’s still a possibility,” Bell said, holding out hope they are one day found. “Tradition holds someone has them, but I have no idea where they are.”