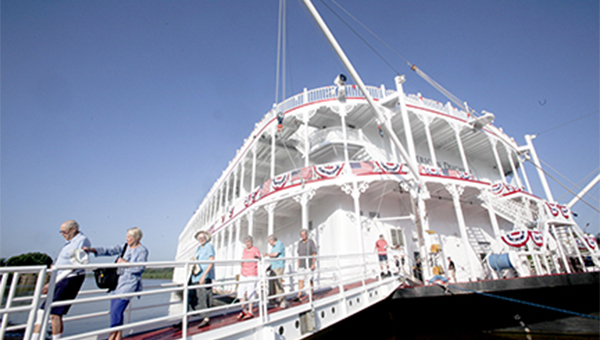 Tourist onboard the American Duchess exit the ship as it docks in Vicksburg on its maiden voyage in August 2017. (Courtland Wells/The Vicksburg Post)

Riverboat cruises to make their return to Vicksburg

The American Duchess was the last riverboat to visit Vicksburg before cruises along the Mississippi were shuttered due to the pandemic in 2020. She will be the first riverboat to arrive in Vicksburg as river cruises — and some portions of life — return to some sense of normalcy.

Both of the Duchess’ arrivals are chartered trips and not regular cruises. Also, the company has said that the hop-on and hop-off tours that were part of their visits are not scheduled for at least these first two visits. But, passengers will take part in a no-contact tour of the Vicksburg National Military Park.

American Cruise Lines will return on March 25, when the American Jazz docks at 8 a.m. It is scheduled to depart at 5:30 p.m. The company has said the first cruise will only include 29 passengers and that future cruises are being limited to just 50 passengers.  It also reported the visit will include only one planned excursion, a no-contact tour of the military park.

American Cruise Lines, in the information provided to the VCVB, did say a majority of those taking part in the first cruise have received the COVID-19 vaccine. American Queen Steamboat Company said that beginning July 1, anyone boarding a cruise must have had the vaccine.

Also, when passengers arrive in Vicksburg, they will be required to abide by local COVID-19 protocols and civil emergency orders.

According to an updated report by the Vicksburg Convention and Visitors Bureau, 164 dockings were canceled in 2020 due to the cruise industry’s shut down due to the COVID-19 pandemic. Already in 2021, the city has missed out on 12 scheduled arrivals.

In 2019, the last full year of arrivals, Vicksburg welcomed 131 visits from riverboats, which delivered 26,158 passengers to the city’s riverfront. The impact of those visitors resulted in $1.98 million for the local economy. Last year, given the increased number of scheduled dockings (181), local tourism and business officials were excited about what the economic impact would be.

Unfortunately, with the cruise industry shuttered, many downtown businesses and tourist destinations suffered significant impacts on their business.

In data from the VCVB, the Vicksburg National Military Park, a popular destination for riverboat passengers, saw a 68.2 percent decrease in visitors in 2020 compared to 2019. The Biedenharn Coca-Cola Museum saw a drop of more than 66 percent.

In the report provided, the destination that saw the biggest decline in visitors in 2020 compared to the year before was the Old Court House Museum. In 2019, the museum reported 28,943 visitors, while just 6,914 guests came through the iconic downtown museum in 2020 — a decrease of more than 76 percent.