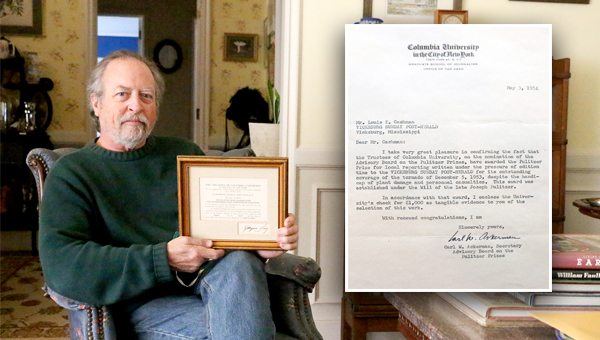 Pat Cashman, who served as publisher of The Vicksburg Post from 1985 to 2013, holds the certificate for the Pulitzer Prize won by the newspaper in 1954 for its coverage of the historic and devastating tornadoes that struck Vicksburg on Dec. 5, 1953. The coveted prize remains with Cashman’s family, who started the newspaper in 1883.

In a time that was void of cellphones, computers and social media of any kind, it was up to print newspapers to inform the public of life’s daily events.

On a tragic day in 1953, The Vicksburg Sunday Post Herald used all its resources — many of them creative — to weather a literal storm and publish a newspaper that would win the greatest award in journalism, the Pulitzer Prize.

On Dec. 5, 1953, a tornado ripped through downtown Vicksburg leaving death and destruction in its path. Thirty-eight people were killed, including six children.

Before an accurate assessment of the damage and casualties could be gathered, rumors were flying.

People in Vicksburg were panicking.

When Publisher Louis P. Cashman Sr. realized the Vicksburg Sunday Post Herald — known today as The Vicksburg Post — could dispel some of the fear, he and his staff set to work.

Fact-finding reporting would need to be done, stories written, photographs taken and the newspaper printed.

But the F5 tornado had broken the city’s main water line and the gas company had shut off power to prevent any more fires. Therefore, efforts to get the newspaper out would have to be done outside the usual mechanics.

“They had to go out to gutters and get water to use to develop the film,” said Pat Cashman, the grandson of Cashman Sr., who served as publisher of The Vicksburg Post from 1985 to 2013.

Because the press was run by gas, it had to be converted to coal.

“Everything at that time was hot metal production so to convert the type lead from gas to coal, they capped off the gas pipes and went out and bought every bag of charcoal in the town from stores that were still open,” he said.

Fortunately, The Herald’s power was soon restored, since its location was close to the hospital where the injured were being taken.

At the time of the tornado, the newspaper office was on the corner of Cherry and South streets and the Mercy Hospital was on Crawford Street.

Although Pat was only a baby at the time of the tornado, he recalled these stories told to him by his grandfather and father, Louis P. Cashman Jr., as well as the historical accounts of The Herald’s heroic efforts that were later documented.

Receiving the Pulitzer Prize for Deadline Reporting and realizing the newspaper’s history, Pat said, had been a big thing for him growing up.

“That’s the highest recognition in the field like that for a daily newspaper. There were a lot of good papers out there and this was something hardly any other paper will obtain,” he said.

The Pulitzer Prize, established by Joseph Pulitzer, who has been regarded as the most skillful of newspaper publishers, is an award that was founded as an incentive to excellence for achievements in newspaper, magazine, and online journalism, literature and musical composition in the United States.