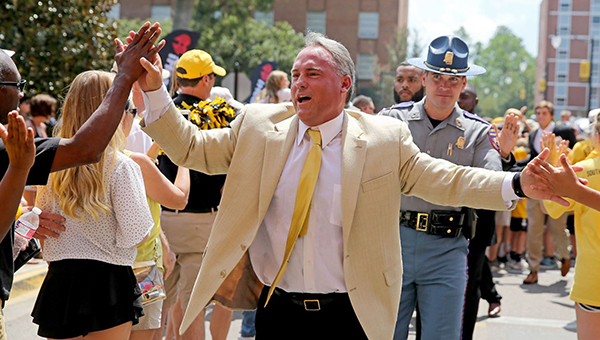 Jay Hopson greets fans on the Eagle Walk during his time as Southern Miss' head football coach in 2019. Hopson, a Vicksburg native who stepped down as USM's coach last season, was hired for an off-field assistant coaching position at Mississippi State. (Southern Miss Athletics)

STARKVILLE — In a nearly 30-year football coaching career spent wandering the various college outposts of the United States, there was one right in his own backyard that Jay Hopson had somehow missed.

Hopson, a Vicksburg native, has been hired as a defensive analyst on Mississippi State’s coaching staff, the university announced Tuesday. Hopson’s position will be an off-field role.

“I am excited about this opportunity and really want to thank Coach Leach,” Hopson said in a statement announcing the hire. “I am looking forward to being a part of the Bulldog Family, and all the exciting things happening at Mississippi State.”

Mississippi State is the 11th different school Hopson has worked at in a career that began as a graduate assistant at Tulane in 1992. It also marks his fifth stop at one of Mississippi’s 10 football-playing universities.

Hopson coached defensive backs at Delta State in 1993 and at his alma mater Ole Miss in 2004. He was the head coach at Alcorn State from 2012-15. And he had three different stints at Southern Miss, the last as the Golden Eagles’ head coach from 2016-20.

Hopson resigned after a loss to South Alabama in the 2020 season opener. He led Southern Miss to winning records in each of his first four seasons as head coach, with three bowl game appearances.

Hopson also was as an assistant coach at Southern Miss from 2001-03 (defensive backs) and again from 2005-07 (defensive coordinator). He had a 60-40 overall record as a head coach at Alcorn and Southern Miss.

Warren Central didn’t hit the ball the way it wanted to on Tuesday. Then again, it didn’t need to. The... read more