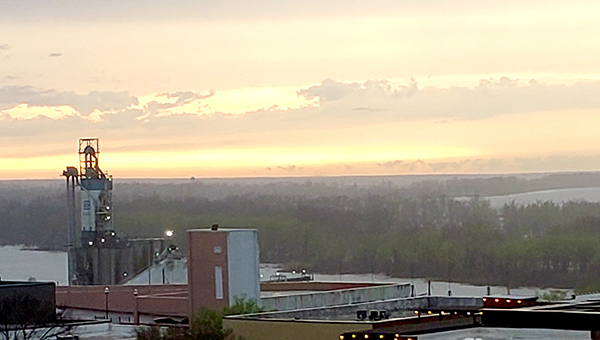 James Dennis shared this photo of the sunset over the Yazoo Diversion Canal and the Mississippi River from downtown Vicksburg Wednesday evening. (Submitted photo)

Warren County Emergency Management Director John Elfer was almost ready to breathe a sigh of relief Wednesday evening but wanted to “give it another 30 to 40 minutes” before breathing easy.

Elfer, along with other emergency and government officials, had watched for days as forecasts and predictions called for a tremendously dangerous weather system for Warren County on Wednesday. While the worst of the predictions did not come to fruition, others in Mississippi were dealt a significant blow by the strong storms.

Multiple tornadoes were reported throughout the state and as of 5:30 p.m., Elfer said “east Mississippi is going to catch the worst of it.”

Elfer reported some power outages in the county and a damaged power pole on Clay Street. He also said county fire units responded to a home on Campbell Swamp Road where residents were reporting an electrical burning smell after the home was struck by lightning

“It’s almost time for a sigh of relief. We can see the sun in the west,” Elfer said. “I would say we have dodged the worst. Thank God.”