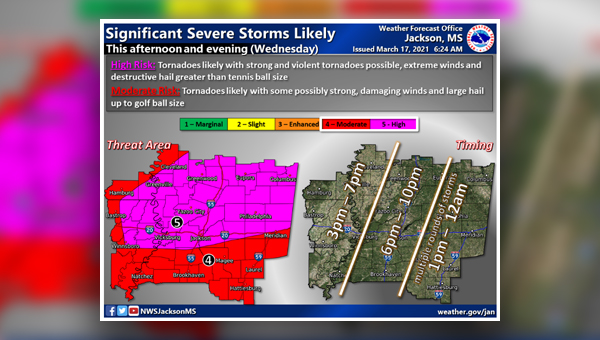 The National Weather Service’s Storm Prediction Center elevated the weather risk for much of Mississippi — including Vicksburg — early Wednesday, placing the area under “high risk.”

The forecast calls for the likely arrival of strong and violent tornadoes, winds in excess of 75 miles per hour and “destructive hail greater than tennis ball size.”

“While the exact location of storms developing is not certain, this is setting up to be a potentially dangerous situation in our area,” Elfer said, adding that the area could likely see “dangerous, long-track tornadoes.”

Elfer said he has not seen concern at this level since a storm system in April 2019 spun off three long-track tornadoes in Warren County that caused significant damage, including tearing up some businesses in the Pemberton Square Boulevard area.

The Weather Channel also elevated the threat level for much of Mississippi. Wednesday morning, the weather outlet placed central Mississippi, including Vicksburg, under a “9” on its tornado condition index, known as TORCON. The scale from one to 10, with the greater number indicating a greater threat of tornadoes. Outlets reported Wednesday that it is “very rare” for The Weather Channel to place any area under a “9.”

Weather conditions in the Vicksburg and Warren County area are expected to begin deteriorating mid-afternoon, with forecasts calling for the threat to arrive at around 3 p.m.

“Now is the time to ensure that your shelter plans and alert systems are in order,” Elfer said. “Pay attention to the latest forecast and changing conditions.”