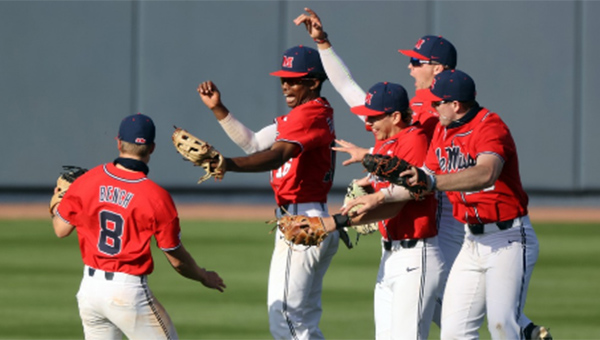 OXFORD — No. 4 Ole Miss put up six runs through the first three innings Saturday, which ultimately proved to be just enough to squeak past Auburn.

The Rebels did not score in the last six innings, but relievers Tyler Myers and Taylor Broadway closed the door with 2 1/3 scoreless innings to preserve a 6-5 victory at Swayze Field.

Ole Miss (15-4, 2-0 Southeastern Conference) won its first SEC series of the season for the fifth year in a row. It will go for the sweep Sunday at 1:30 p.m.

Calvin Harris drove in three runs for Ole Miss, including two on a double in the second inning. His sacrifice fly in the third gave them a 6-2 lead, but they struggled to score after that.

Despite having runners on base in every inning, the Rebels did not score again after the third.
Auburn, meanwhile, hit three home runs in the game and mounted a late comeback. Ryan Bliss hit two solo homers, in the third and seventh innings, and Tyler Miller hit one in the seventh to trim a 6-2 deficit to 6-5.

Myers entered the game after Miller’s homer and gave up a single before getting out of the inning and then throwing a 1-2-3 eighth. Broadway worked around a two-out single in the ninth to earn his third save of the season.

Mississippi State 3, LSU 0
Another dominant pitching performance for No. 2 Mississippi State (16-3, 2-0 SEC) gave it a series victory over No. 10 LSU (15-5, 0-2). The Diamond Dawgs posted their fifth shutout of the season — tied with Oklahoma State for the NCAA lead — and held the Tigers scoreless for the first time in 2021.

In his second start of the season, second-year freshman Will Bednar (1-0) threw five scoreless innings and retired 13 straight batters between the first and fifth innings. He allowed three hits, walked one and struck out seven. Sophomore Preston Johnson struck out one and walked two in two innings, before second-year freshman Landon Sims closed down his second save of the season with two innings of two-hit work and two strikeouts.

Mississippi State had four hits but used a sacrifice fly from Lane Forsythe to open the scoring in the fifth. An RBI single from Rowdey Jordan followed a leadoff walk and a wild pitch in the eighth. In the ninth, a one-out walk was followed by a double from Logan Tanner and an RBI ground out from Josh Hatcher.

The Bulldogs and Tigers will close out the series at 2 p.m. Sunday at Alex Box Stadium in Baton Rouge.

The Golden Eagles (11-6) also captured their seventh victory over the last eight games, as they posted their fourth shutout of the season.

Powell (3-1), who extended his current scoreless innings streak to 23, limited the Bears (6-7) to three hits and one walk over eight innings. He struck out six and retired nine consecutive batters at one point.

Of the four baserunners that Powell allowed, only Drake Baldwin got past first base with a one-out double in the seventh inning.

Tanner Hall closed it out with a perfect ninth inning.

Southern Miss left 11 runners on base and did not score until putting up two runs in the fifth. Four straight walks, including two with the bases loaded to Reese Ewing and Danny Lynch, put USM ahead 2-0.

In the sixth, Gabe Montenegro reached on an infield single and Reed Trimble was hit by a pitch, Fischer doubled to right-center to score both runners and make the score 4-0.

Andrew Stanley knocked in the last Golden Eagle run with a sacrifice fly in the seventh.
Southern Miss will go for the series sweep Sunday at noon at Pete Taylor Park.

Sterling allowed one unearned run and one walk, and struck out five batters. At the plate, he singled and walked twice.

In game two, the Eagles piled up 14 hits in four innings and rolled to a 13-0 victory.

Former Warren Central star Vantrel Reed went 3-for-4 with one RBI and three runs scored, Connor Carter was 3-for-3 with two doubles and two runs scored, and Pablo Lanzarote drove in two runs.

Eight players drove in at least one run for Hinds in game two.

Hinds (11-9) will next play Wednesday, when it takes on Pearl River Community College at Joe G. Moss Field on the Raymond campus. The doubleheader will begin at 3 p.m.