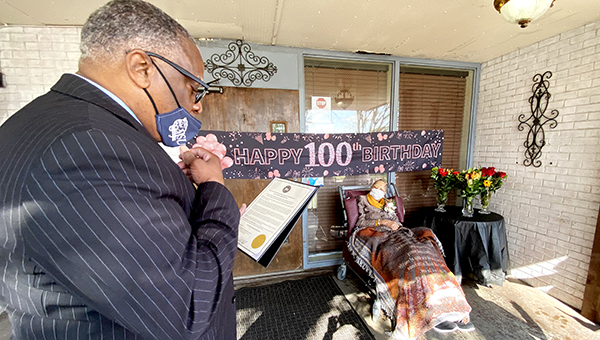 Resident honored with ‘Victoria Broadwater Day’ as she turns 100

There was an unexpected meeting Saturday of two people, separated by 32 years, who shared something in common — a birthday.

During a small gathering at Vicksburg Convalescent Home, Mayor George Flaggs Jr. — himself marking his 68th birthday — had the chance to present a proclamation honoring the 100th birthday of Victoria Broadwater.

“How much of a blessing is this?” Flaggs asked. “To get the chance to honor Ms. Broadwater on her 100th birthday on my birthday is an absolute blessing.”

Joined by some of the home’s staff and Victoria’s daughters, Katie Dearborn of Raymond and Barbara Broadwater of Jackson, Flaggs honored Victoria’s milestone with a proclamation making March 20 “Victoria Broadwater Day” in Vicksburg.

“Longevity of life is a blessing for an individual and for a community which benefits from the knowledge, creativity and experiences this individual brings to all,” Flaggs said in reading the proclamation.

“She has been described as a very humble, gracious, kind and loving person who has opened her home to many relatives throughout her life and has given to others without hesitation,” Flaggs said as Victoria looked up from her chair, without speaking. “She is a caring mother to all her children and grandchildren.”

According to the proclamation, Victoria was “reared in a farm background and knows the importance and value of essential needs. She and her family farmed the land for many years, growing crops of fruits, vegetables and livestock. Her family enjoyed fresh foods long before preservatives and additives. This has attributed to her long life.”

Thanks to the Board of Mayor and Aldermen, “Miss Sue” will never be forgotten. During a ceremony Friday attended by... read more