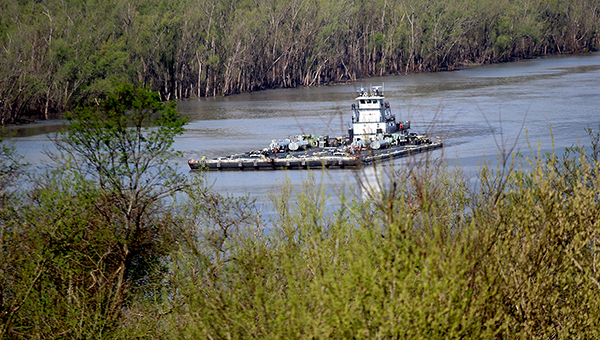 A barge heads down the Yazoo Diversion Canal away from the Port of Vicksburg Saturday morning. (Tim Reeves/The Vicksburg Post)

After months of meetings, negotiations and due diligence, the Port of Vicksburg has a new management agreement with a very familiar partner.

Watco’s existing contract was set to expire at the end of January, but the county allowed a short extension while local economic officials and the company ironed out the remaining details of the new contract. The new agreement goes into effect April 1.

“The commission worked hard with Watco to reach a lease agreement that would be beneficial for both Warren County and Watco,” Don Brown, chairman of the Warren County Port Commission, said. “The process involved a great deal of communication between the supervisors and the Port Commission and we are proud to say the outcome is enthusiastically supported by all parties.”

Pablo Diaz, executive director of the Port Commission, said negotiations on a new agreement began in November and includes a commitment on the part of Watco for additional investments in the port and its facilities.

He said the company has laid out plans for an estimated $500,000 in investments, including a winch system on the port’s T-dock, which will allow more efficient loading and unloading of barges, and the addition of more office space.

The company will also receive additional acreage at the port for storage that will further expand its revenue potential.

“I think we got a good deal for Warren County and the Port Commission, and we certainly benchmarked with other ports in the Southeast before we started negotiations and had specific goals in mind,” Diaz said. “The idea that we potentially have a good operator and partner for up to 20 years is also of value and in the last few years, Watco has demonstrated a willingness to invest along with us in the property. They needed long-term security in order to accelerate this investment and we felt this was a win-win for them and our community.”

The Port of Vicksburg, among the busiest inland ports in the nation — most-recently ranked as the 15th busiest port — continues to have not just a regional reach, but a national and international reach as well.

In a recent interview with The Post, Diaz said the scope of products coming in and leaving the port impact economics around the world.

“Shipments reach any geographic location, including both regional markets like Alabama and Louisiana, all the way to Japan, Germany or Australia,” Diaz said. “It really all depends on who is moving what, but at the end of the day, Vicksburg is a player in regional, national and global trade.”

“The types of products or materials that come through the Port of Vicksburg change according to what is going on in the national and international economy. We are lucky to have a big presence of oil-related industries in Vicksburg, but the amounts and types of products that get shipped from our area are affected by the demand and price of oil,” Diaz said. “So, how much we ship and what materials get shipped is all tied to the economic health of the different trade sectors that utilize the river as a means of transportation.”

Industries in the Port of Vicksburg employ more than 4,000 people.

Over the last year, the Port Commission met and interviewed a number of potential port facility companies as they looked at the expiration of Watco’s existing contract. Diaz said he, along with Commission Chairman Don Brown and Commissioner Margaret Gilmer, formed a subcommittee that led the effort for the Port Commission, which ultimately decided on Watco and made the recommendation to the supervisors.

“This was a tremendously important process and definitely relieved the process is done,” Diaz said. “Everyone believes this is a good agreement where we can work toward growth, where we can increase tonnage and continue to pull more traffic in our port.”