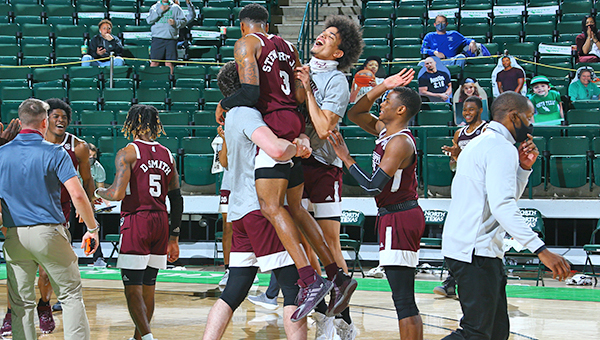 Mississippi State's D.J. Stewart (3) is mobbed by his teammates after hitting a 3-pointer with less than 2 seconds left to beat Richmond 68-67 in the NIT quarterfinals on Thursday. (Courtesy of the NCAA)

D.J. Stewart Jr. made a 3-pointer with two seconds remaining to lead Mississippi State to a 68-67 win over short-handed Richmond in the NIT quarterfinals.

The Bulldogs (17-14) advanced to the NIT’s Final Four for the third time in program history. They’ll play Louisiana Tech in the semifinals Saturday at 2 p.m.
Louisiana Tech beat Western Kentucky 72-65 in another quarterfinal Thursday.

Memphis and North Carolina State will meet in the other semifinal, Saturday at 11 a.m. Both semifinals will be televised by ESPN.

The NIT championship game is Sunday at 11 a.m. on ESPN.

Mississippi State also reached the NIT semifinals in 2007 and 2018, but lost both times. The only Mississippi team to ever win the tournament was Southern Miss in 1987.

Trailing 67-65 against Richmond, Mississippi State forward Abdul Ado missed two free throws with 16 seconds left, and then fouled out to send Andre Gustavson to the line at 8.7. Gustavson missed the front end of a 1-and-1 to set up Stewart’s winner from the top of the key.

Stewart took three dribbles in stride after a solid outlet pass from Quinten Post. He swished the go-ahead 3-pointer with two seconds remaining.

“I was trying to find the ball whenever I looked back and saw the ball was in the air from QP,” Stewart said. “I was either going to lay the ball up or just go for the win. I chose to go for the win, and it went in.”

Richmond was not able to get a shot off before the buzzer as Stewart secured the tipped inbound pass near midcourt.

Stewart finished with 22 points, making all 10 of his free throw attempts for Mississippi State (17-14). Iverson Molinar had 18 points and seven rebounds, Ado added 11 rebounds and Javian Davis had seven rebounds.

Mississippi State was 16-of-18 from the line, with its only misses coming from Ado in the closing seconds.

Jacob Gilyard tied a season high with 22 points and had six assists for the Spiders (14-9). Matt Grace added 16 points.

Six years after he made NFL history at the Arizona Cardinals’ State Farm Stadium, Malcolm Butler is hoping he can... read more