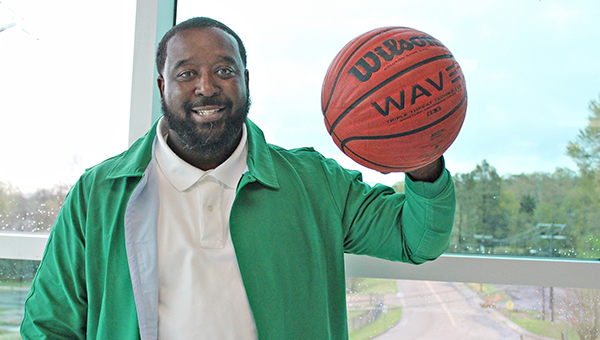 Vicksburg High girls' basketball coach Troy Stewart is the 2021 Vicksburg Post basketball Coach of the Year for Warren County. It is the second year in a row he has won the award. (Ernest Bowker/The Vicksburg Post)

Vicksburg’s Stewart repeats as Coach of the Year

Coming off the program’s best season in more than 20 years, Vicksburg High girls’ basketball coach Troy Stewart was suddenly looking at what many people would consider a rebuilding job.

Four starters, including one of the team’s top scorers, either graduated or transferred.

Rather than panic, however, Stewart merely recalibrated. He had a fresh cast of freshmen and sophomores ready to step into bigger roles, and they did. The Missy Gators won 16 games and their second consecutive Region 4-5A championship, and for keeping the program rolling Stewart also earned his second straight Vicksburg Post basketball Coach of the Year award.

“I’m appreciative,” Stewart said of winning the award. “It just goes to show the hard work my assistant coaches and girls are putting in.”

Stewart won the Post’s award after guiding the Missy Gators to a 20-11 record and the MHSAA Class 5A semifinals in the 2019-20 season. When the team reconvened for preseason practice in the fall of 2020, however, it had a different look.

Four starters who combined to average more than 25 points per game were gone. The list included Yakia Burns, the second-leading scorer, who transferred to Porter’s Chapel Academy and wound up winning the Post’s 2021 girls’ Player of the Year award.

Stewart, though, said he’s been building the program for seasons like this since he took over as head coach in 2017. He carefully worked in a number of rising freshmean during last season’s playoff run and they ably stepped into starring roles this year.

Sophomores like Layla Carter, Ja’Na Colenburg and Janiah Caples picked up the scoring slack. Point guard Sha’Kora Knight, one of two seniors on the roster, became a vocal team leader.

“The ladies that played for me never skipped a beat,” Stewart said. “They were just on to the next thing and kept playing. I was proud of them for not letting any of the hurdles or the obstacles interfere with how we played this year.”

Stewart said last year’s playoff run provided the base for this season’s success. Not only did it give the Missy Gators a shot of confidence, it gave the younger players valuable experience.

Although they were starters for the first time this season, most of the sophomores saw plenty of playing time in the 2020 playoffs.

This season, they dominated Region 4-5A and cruised to a second straight league title. The Missy Gators won all seven region games by double digits.

“After we won the district tournament last year we went to Itawamba and I saw the results of integrating the younger ladies. They were an integral part of that run. I knew right then that we were going to be decent again. I didn’t know we would go to this level,” Stewart said.

Stewart added that working younger players into the rotation and giving them varsity minutes whenever possible is by design. It’s part of building a program that lasts rather than one or two great teams as talent cycles through.

Beginning with the seventh-grade players, Stewart said, he and assistant coaches Deatra Cable and Valencia McFarland try to put a plan together for each particular class to succeed on its own talents while also acclimating them to a larger system.

“We look at them in seventh grade and try to work a system in offensively that is going to work for the next four or five years with that group of girls so they’ll have their best chance to be successful,” Stewart said. “Defensively, we don’t change what they do. So they’re hearing the same language and all they’re doing is playing harder and faster each year because it becomes part of their DNA.”

Stewart’s system — which he credits longtime VHS boys’ coach Dellie C. Robinson for originating — is working well so far. He has a 69-45 record in four seasons, and plans to add a lot more wins to that total in the next couple of years.

“The immediate future is extremely bright. I don’t want to sound arrogant or cocky, but I truly expect to be playing for a state championship next year or at least the semifinals because you can only see yourself going up from this year,” Stewart said.

Winning a championship, Stewart admitted, is a product of both talent and luck. This year’s team was eliminated in the second round of the playoffs after getting a tough draw that put it up against a top-five opponent in Neshoba Central.

Preparation and a winning culture, however, can reduce the variables that require massive amounts of luck. After four years at the helm, Stewart has led the Missy Gators out of Mississippi’s basketball wilderness and back to their status as a championship contender.

“It’s weird for me to think of Vicksburg basketball as down. Since I was a student here and I’ve been coaching here, Vicksburg boys and girls have been a prominent force on the basketball court. I don’t think we’re bringing it back to prominence. They just had a down tick,” Stewart said. “Coaching high school sports, you’re going to have those ebbs and valleys. We try to lessen those valleys by preparing early, so we don’t drop that far off.”

TUSCALOOSA, Ala. — No. 3 Ole Miss improved to 6-0 to start Southeastern Conference play for the first time since... read more