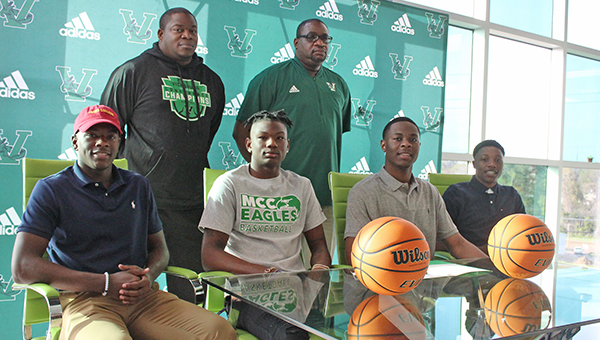 For years, the core members of Vicksburg High’s basketball team bled and sweat together to make the program successful. Wednesday evening, they gathered one last time to celebrate heading their separate ways.

Smith and Hardy both signed with Jones College. Williams signed with Mississippi Gulf Coast, and Brown with Meridian Community College.

“It feels good to finally be signed, and then my teammates are all signing. We’re going our different ways but continuing the journey,” Hardy said. “Hopefully we meet up one day and play against each other, and sit back and laugh on that.”

Hardy and Smith were a package deal for Jones.

Hardy, the 2021 Vicksburg Post Player of the Year, averaged 10.6 points, 5.9 rebounds, 4.7 assists and 2.4 steals while playing point guard. His wingman was the sharpshooting Smith, who scored a team-high 15.7 points per game while making 44 of 86 attempts from 3-point range. More than half of Smith’s points came on 3-pointers.

Both guards said they were looking forward to playing together again at the next level.

“The chemistry is going to be there because I’ve been playing with him since junior high,” Smith said. “Their coach told us when he came to one of our practices that he wants us to run guard next year. He felt like it would be a good fit because he’s got sophomores leaving next year.”

Williams also felt like he’ll be a good fit with Mississippi Gulf Coast. The 6-foot-7 forward averaged 8.2 points, 10 rebounds and 2.6 blocks this season, as well as 3.1 assists.

“They need a good-sized big man. I like how they run their offense and defense, and I think I’ll be a good fit at the school. I’ll get to move around some. They fit me best,” Williams said. “It’s real special, because I’ve always thought about playing on the next level and keep moving on.”

Brown, meanwhile, emerged as one of Warren County’s top players in the second half of the 2020-21 season.

He scored the game-winning basket in overtime against eventual Class 6A champion Clinton, dropped 28 points on Callaway in the Region 4-5A tournament championship game, and finished as the Gators’ second-leading scorer with 13.6 points per game.

Brown also averaged 8.6 rebounds per game, highlighting his versatility at the guard spot.

“Coach gave me the green light. He told me to go play my game,” Brown said. “It’s amazing. I just want to thank God for everything, and all the coaches that gave me a chance to play for them. But Meridian, they’ve been looking at me since the 10th grade, so it feels very special to get an opportunity to be on the next level.”

Brown has had a chance to study Meridian as well. Two other former Gators, Jermiyah Brown and Tyron Moore, played for the Eagles this season. Seeing them develop, Brown said, gave him confidence that he was making a good decision signing with Meridian.

“I saw Tyron play high school ball, and I’ve seen how he played at Meridian, and he became a great player,” Brown said. “He’s playing defense better, he’s shooting better, he’s dunking the ball easier. It changed him a lot, so I feel comfortable with Meridian.”

The Class of 2021 brings to 10 the number of Vicksburg players who have signed since Kelvin Carter took over as the boys’ coach in 2017. Carter said a couple more of this year’s players are still weighing their options and could sign in the coming weeks.

“The goal we set out every season is to win a gold ball. But when you can get a senior group to further their career, scholarship-wise, by playing ball, it’s super duper gratifying,” Carter said. “This was a great group of guys. Despite the COVID they still put the work in when we can, and we had a good three years together. These guys were phenomenal kids, very respectful. I wouldn’t trade them for the world.”

Getting to continue on to the next level, Smith said, was also gratifying.

“It’s a great feeling,” Smith said. “You put all the work in — shooting in the rain, coming to practice early, being the last one to leave practice — and you get a scholarship in the end.”