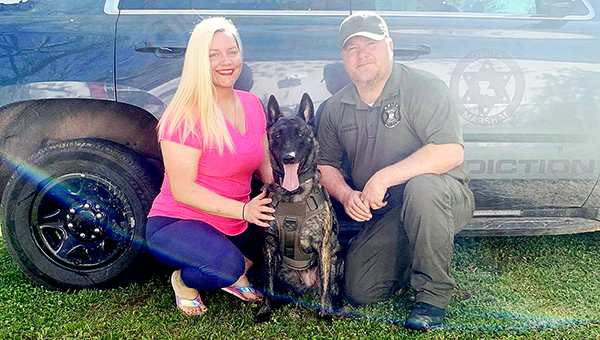 DELTA, La. — Thanks to the outpouring of support from hundreds of contributions, a local K9 officer is just weeks away from going through a life-saving medical procedure.

In March, Delta, La., Marshal David Beckham and his girlfriend, Nikki Williams, asked for help to pay for a surgery that would return K9 Officer Zuma — who is Beckham’s partner and the couple’s dog — back to good health and back to the line of duty.

“We have an appointment set for April 20 at LSU for the consultation. If she’s a good candidate for the surgery, she will have the surgery the next day,” Williams said.

Zuma will turn 5 on Monday.

“She would get disoriented and start to wobble and then fall,” Williams said. Recently, the couple paid more than $800 for tests and exams, including an echocardiogram of Zuma’s heart, that finally identified the cause of her issues — Pulmonic Stenosis, a congenital heart defect.

In March, Williams created a GoFundMe page to help raise money to pay for the expensive surgery.

In days, nearly $4,000 was raised through the site to cover most of the expected expenses.

“We should have enough funds for everything. We are hoping that the surgery is between $3,000 and $4,000,” Williams said.

In addition to the $3,975 raised through the GoFundMe site, the couple received another $790 that was contributed through Protecting K9 Heroes, an Illinois-based group focused on providing essential equipment to K9 officers.

Williams said that any amount of money raised for Zuma that is not used will be donated to Protecting K9 Heroes “so they can continue helping beloved police K9s in need.”

Even though the procedure is considered “minimally invasive” to correct Zuma’s heart issue, “it is still heart surgery,” Williams said.

“I do know we would not have been able to do all of this so quickly without the help and support of everyone who’s donated and prayed. It’s truly been a blessing for David and me,” she said. “We are a nervous wreck about it though. Zuma means the world to us and we are ready to have her back to her crazy, spunky self. She’s full of personality and shows it off all day every day. Now we will just pray that the surgery goes well.”

She said that depending on the surgery, Zuma may be able to return to full patrol work with Beckham.