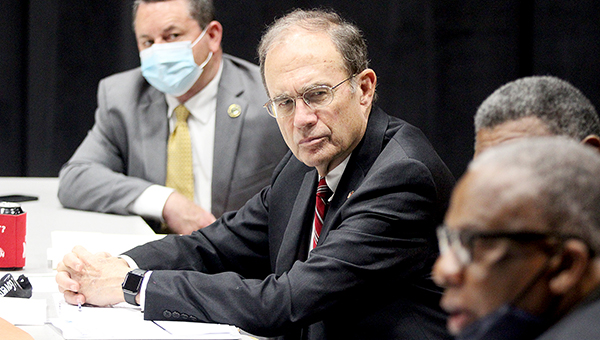 Talk of either building a new Port of Vicksburg or expanding current port facilities is no longer just talk. Action is being taken on what some have called a “generational project for Vicksburg.”

During a meeting Wednesday with nearly all of Vicksburg and Warren County’s elected officials on the local and state level, economic officials announced an environmental assessment has started on a site south of the Mississippi River bridges that could soon be home to a massive new port facility.

For the first time publicly, the expansion plans of a new port facility or ideas on how to expand the current Port of Vicksburg were discussed.

One plan calls for expansion of the current port facilities to the north, moving 10 acres at a time to allow for a more targeted approach. That plan, officials estimated, would cost $47.55 million. The larger of the two plans, a new port facility, would be located on the Mississippi River next to Entergy’s Baxter Wilson facility.

This idea calls for the development of 256 acres — including dredging access areas, and construction of port and office facilities — at an estimated cost of $102 million.

A contract for the assessment, which will be conducted by Neel-Schaffer Engineering, was signed Monday by city officials and is being paid for by funds allocated by the Mississippi Legislature.

Lt. Gov. Delbert Hosemann, a native of Vicksburg, led Wednesday’s meeting and said this assessment is the “next step” in a conservative approach to see if a port project of this size is viable.

“This idea of a new port project in Vicksburg has been refined. I think what we discussed today is the third iteration of the idea,” Hosemann said. “But we have been meeting with local officials and others to get the economics to be viable. We have to make a decision on whether to expand our current port, which would help smaller industries, 10 acres at a time, or do something for major industrial growth south of town that is a bit more expensive.”

Hosemann also credited the work of the local state delegates — State Sen. Briggs Hopson, State Rep. Oscar Denton and State Rep. Kevin Ford — for their work in getting the funds allocated to pay for the assessment.

The environmental assessment, along with the previous port market analysis, site benchmarking, and other due diligence efforts in the project, has been funded by a $1 million appropriation by the Legislature during a special session in 2018, and an additional $325,000 appropriated by the Legislature during the session that ended last week. The environmental assessment is estimated to cost $800,000.

“This is the first step,” Hosemann said. “When the assessment is completed, then you will be at a point where you could start construction.”

Neel-Schaffer’s Keith O’Keefe said after the meeting that the assessment is of the property next to Baxter Wilson where a new port facility could be constructed. The potential future site of the development is owned by Entergy. Areas near the current Port of Vicksburg are not included in the assessment.

Hosemann, who informed the group of how federal and state funds could be used to help with the construction and the building of infrastructure needed to make either project work, did urge a conservative approach. He urged economic leaders that if a new port project is decided, then having targeted industries and business sectors lined up to come on board is crucial to make taxpayer investments pay off.

The market analysis estimated the creation of 600 direct jobs and hundreds of millions in additional investment and annual payroll was possible from the new port and these business sectors.

“We’re thankful that Lt. Gov. Hosemann and Vicksburg’s entire legislative delegation supported the funding needed to finalize an environmental analysis for the port expansion project. This is a once-in-a-generation project that could have immense positive impacts for our community for the next three or four decades,” Mayor George Flaggs Jr. said. “The city created the Port Expansion Committee to explore our options and they have done a great job getting us to this point. I believe in Vicksburg and in our capacity to do anything we put our minds to do. This project is no different and so we move forward.”

Before the market analysis was started, the Port Expansion Committee was formed to help guide the project, benchmark what was needed in port sites and seek out property that could be the site of a facility suited to target these industries. That committee included Warren County Board of Supervisors president Dr. Jeff Holland, Austin Golding, Patrick Smith, Trey Hardaway and Vicksburg-Warren Economic Partnership President & CEO Pablo Diaz.

The site benchmarking analysis was recently completed and its main recommendation, officials said, is that the development should happen next to Baxter Wilson currently owned by Entergy Mississippi.

The goal of the assessment of the property near Baxter Wilson is to provide “critical geotechnical and hydraulic information as well as traffic impact studies and design intelligence that will inform the conceptual design of the project.”

“As with all long-term projects like this one, you have to put one foot in front of the other and take care of each thing on the checklist as you prepare for final design and development,” Diaz said. “This step will give our community important information needed for the design phase and will hopefully help us get funds as we move into a future development phase.”

“We are immensely lucky to have the city and county, as well Entergy Mississippi and our state leaders, all involved in this project and paying close attention to it,” he said. “As we start and finalize the environmental analysis, our community team will continue to work hard to cross every T and dot every I before any construction is recommended to begin.”

The Port of Vicksburg is the 15th largest inland port in the country based on millions of tons according to the U.S. Army Corps of Engineers data.

But the ranking is just one statistic. Locally, the port supports 21 industries that employ an estimated 4,000 people.