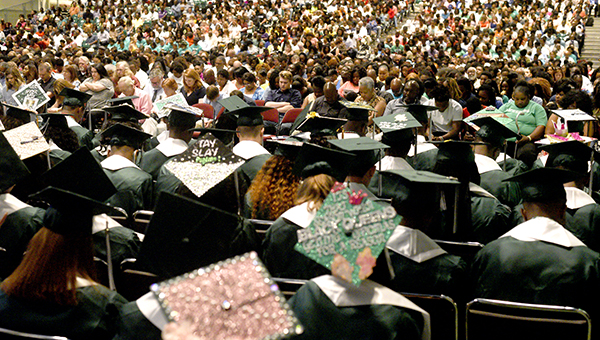 Monday, those plans got even better as the District announced that instead of multiple graduation ceremonies for both Vicksburg and Warren Central, each school’s graduating classes will be allowed to have one graduation ceremony to include all graduates from their respective schools. The change is thanks to improved COVID-19 numbers in Warren County and changes to restrictions limiting gatherings within the city and state.

And instead of graduates being allowed just four guests to graduation ceremonies at the Vicksburg Convention Center, the District announced increases to the number of those who can attend with each graduate.

Following current mandates set by local and state leaders, the ceremonies at the Vicksburg Convention Center may be filled to 75 percent capacity and attendees will be required to wear masks covering both nose and mouth for the duration of the event. The changes will allow the Class of 2021 to graduate together and still provide the opportunity for a limited number of family and friends to attend the ceremonies.

For River City Early College High School graduates, their graduation ceremony on May 26 will be held at 6 p.m. at the Vicksburg Convention Center. Each of the estimated 60 graduates will be allowed 10 tickets.

For the estimated 250 seniors at Warren Central High School, they will each be allowed six tickets to their graduation ceremony on May 27 at 6 p.m.

After the beginning of the COVID-19 pandemic last spring, many events were canceled or remade into virtual events. School and District officials coordinated a virtual graduation for each member of the Class of 2020, where each student was videoed receiving their diploma. Those snippets were then compiled into an overall graduation ceremony that was shared with students and on social media.

“If executive orders change between now and the graduation dates, further adjustments to current plans may be necessary,” the District said in its release Monday. “While last-minute changes can be challenging, the District will continue to find ways to safely celebrate the accomplishments of this year’s seniors and acknowledge the support provided by their families throughout the years.”

District officials also said additional information about graduation will be distributed to seniors at each school.

Profile 2021: A deserving award for those who preserve…