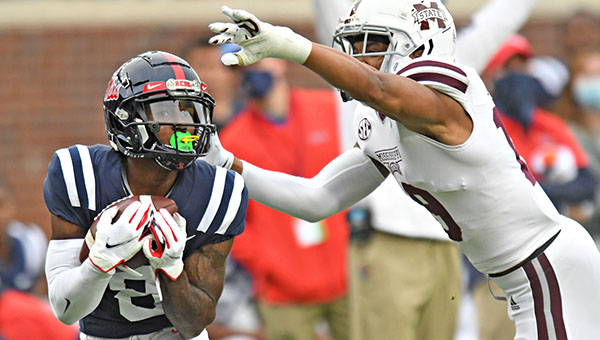 JACKSON — May 24 will be college sports awards day in Mississippi.

A total of 19 nominees were announced Monday for the C Spire Outstanding Players Awards, given annually to the top players in Mississippi in college football, baseball and men’s and women’s basketball.

All four awards will be presented May 24 during a virtual program originating from the Mississippi Sports Hall of Fame. Because of the pandemic, the presentation of the football and basketball awards was delayed until the end of the 2020-21 athletic year.

The ceremony will be streamed live at msfame.com.

Each of Mississippi’s football-playing universities picked one finalist for the Conerly Trophy.

Ole Miss, Mississippi State and Southern Miss played football during the fall of 2020, while the state’s other schools played in the spring of 2021. Alcorn State and Delta State did not play at all, and thus did not have a nominee for this year’s award.

The Ferriss Trophy is presented to the top college baseball player in the state, and the list of five finalists was exclusive to Ole Miss and Mississippi State.

The Ferriss Trophy is selected by Major League Baseball professional scouts and coaches.

The Gillom Trophy, selected by statewide media and given to the top women’s college basketball player, will have a fresh look.

The finalists are Jackson State center Ameysha Williams and guard Dayzsha Rogan and Ole Miss forward Shakira Austin. No players from Jackson State or Ole Miss have won the award since it was started in 2008. Mississippi State players have won it each of the last seven years.

Mississippi State players have won the last three Howell trophies. No Jackson State player has won it since Trey Johnson in 2007. Shuler was a first-team All-Southeastern Conference selection after averaging 15.3 points per game.