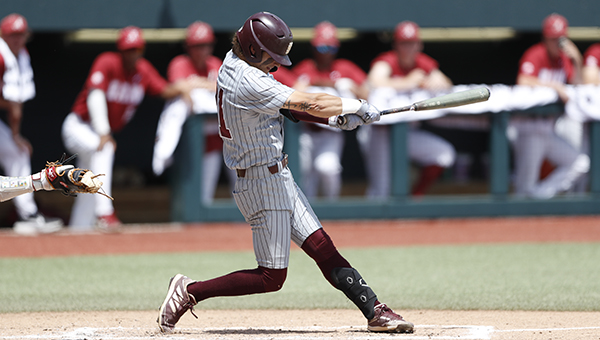 TUSCALOOSA, Ala. — Mississippi State will head into the Southeastern Conference Tournament with an extra day of rest and plenty of momentum.

All nine starters had a hit, and Houston Harding retired 15 consecutive batters during a dominant relief appearance as Mississippi State beat Alabama 7-3 on Saturday in the regular-season finale for both teams.

Mississippi State (40-13, 20-10 SEC) earned its fourth series sweep of the season and will be the No. 3 seed in the SEC Tournament. It avoided Tuesday’s single-elimination round, and will face either Florida or Kentucky at 9:30 a.m. Wednesday in Hoover, Ala.

“We have been one of the top teams in the country all year. I do not know if we have fallen out of the top eight all year besides maybe number 10 this week after stubbing our toe last weekend. It is what we have done in the league playing in the toughest conference in the country,” Mississippi State coach Chris Lemonis said. “We put it on the line going out of our league and played a lot better than a lot of people. A lot of people do not spend as much time pushing themselves outside (their conference) like we did.”

Harding pitched 5 2/3 innings after relieving starter Jackson Fristoe to start the third inning. Sam Praytor greeted him with a single, but was erased on a double play two pitches later.

Harding did not allow another baserunner until walking Peyton Wilson with one out in the eighth inning.

Harding did not have any strikeouts, but also needed just 60 pitches to get through his extended outing. He walked two batters and allowed two hits.

“He was probably as efficient of a pitcher that we have had all year. We did not get the strikeouts that we are used to, but we had some quick and easy innings. He was sharp,” Lemonis said.

Harding’s strong relief effort allowed the Bulldogs to stabilize things after falling behind 3-0 in the second inning. They scored four runs in the fifth inning and three more in the sixth to surge ahead.

Rowdey Jordan hit a two-run single in the sixth inning, and a pair of Alabama errors allowed two other runs to score.

Alabama threatened to rally in the eighth, loading the bases against Harding before he was replaced by Preston Johnson. Johnson got out of the jam with a fly out, and then Landon Sims worked around a walk and a hit in the ninth to finish it out in a non-save situation.

Georgia 13, Ole Miss 2
Ole Miss did not have a lot to play for on Saturday, and it showed.

Peyton Chatagnier hit a solo home run for Ole Miss to tie the game at 2 in the second inning, but it did not score again. Georgia, meanwhile, took the lead for good on Riley King’s two-run single in the third, added four more runs in the fourth, and five from the sixth inning on.

Despite the loss, Ole Miss earned the No. 5 seed for the SEC Tournament, which it was more or less locked into when the day started. It will play Auburn in a first-round elimination game Tuesday at 8 p.m.

LSU 8, Texas A&M 2
After two tight games against Texas A&M, including a 13-inning marathon, LSU finished the regular season with a laugher.

Ma’Khail Hilliard allowed two runs in seven innings, and Gavin Dugas, Zach Arnold and Drew Bianco all homered to back him as LSU routed Texas A&M (29-27, 9-21 SEC) on Saturday in the series and regular-season finale.

LSU (34-21, 13-17) won its last three SEC series and will head into the conference tournament as the No. 9 seed. It will play Georgia in the single-elimination round Tuesday at 4:30 p.m. in Hoover, Ala.

Texas A&M did not qualify for the tournament.