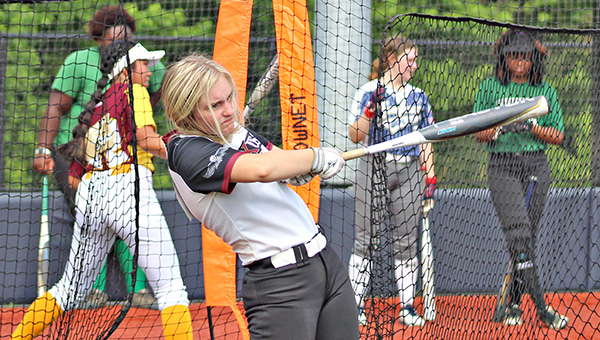 Lennie Wood, of Winona, hits the ball during batting practice at the Stars Over Mississippi Summer Showcase camp Thursday at Sports Force Parks. The camp is part of a four-day showcase event for some of the southeast's top fast-pitch softball players and teams. (Ernest Bowker/The Vicksburg Post)

For residents of Vicksburg, the uniform of summer is shorts and a T-shirt. For a lot of the visitors this weekend, it will be softball pants and jerseys.

Nearly 70 teams and 2,300 people from five states started arriving in Vicksburg on Thursday for the Stars Over Mississippi Summer Showcase, a youth softball event that will give some of the region’s top fast-pitch players a chance to show off their skills to college and junior college coaches.

The showcase for players in the 12U through 18U age groups started with a day-long camp Thursday at Sports Force Parks on the Mississippi, and games will be begin there Friday at 9 a.m. Admission is $30 for the entire weekend, or $12 per day. The showcase concludes on Sunday.

“There’s not a lot of showcases in the state of Mississippi, and that’s one of the reasons why I came here — not only for the venue, and the staffing and the location,” said Danielle Cox, whose Birmingham-based company DCB Elite Academy Productions is running the showcase. “Most of your showcases are in metropolitan areas, and I saw the need in Mississippi and that’s why I came west.”

The Stars Over Mississippi Showcase will include teams and players from Mississippi, Louisiana, Georgia, Alabama and Tennessee. In addition to them, coaches from nearly two dozen colleges and junior colleges will be in attendance to scout players and help with the tournament.

The coaches were heavily involved in Thursday’s camp, as well, as they pitched batting practice and ran drills at the various fields at Sports Force Parks.

“We’re bringing in about 30 college coaches from all over the Southeast. The kids will be showcasing their talents. National Scouting Report is coming out and they will be giving free combine testing, which is measurables for all the athletes,” Cox said.

Besides the games, the showcase is basically a four-day softball festival in Vicksburg. The camp started things on Thursday, and was to be followed by a kickoff party in the evening. Players and teams will also participate in a scavenger hunt in downtown Vicksburg during the weekend.

Cox said she’s been thrilled with the response to not only the showcase — all of the available slots sold out — but the staff at Sports Force Parks and Vicksburg’s Convention and Visitors Bureau as well.

Cox’s company puts on similar showcases in Alabama and Georgia each year. This is the first edition for the Stars Over Mississippi Showcase, but Cox already seemed to be planning a return and a potential expansion if more fields become available in the future.

“The venue is top-notch, the staff is top-notch. They run everything very professional,” Cox said. “It’s in a great, central location where teams can come, and we’ve had some really good relationships with the (Convention and Visitors Bureau) here in Vicksburg. They’ve been really good to us.”

The Pirate and Penson are bringing their show to the River City. Vicksburg will be among eight stops on Mississippi... read more