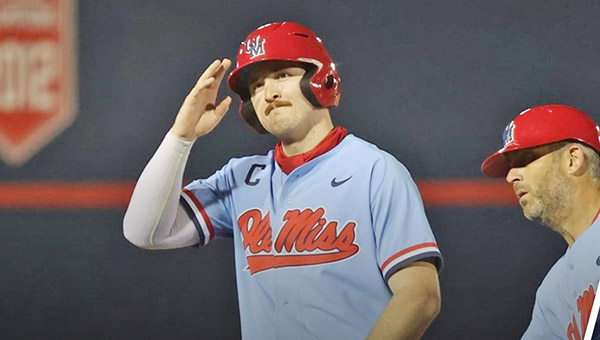 The Ole Miss Rebels added Tucson, Arizona, to the long list of cities where their postseason dreams have gone to die.

Branden Boissiere went 4-for-6 with two doubles, drove in five runs and scored three, and No. 5 seed Arizona pounded Ole Miss 16-3 in the deciding Game 3 of an NCAA Tournament super regional series on Sunday.

In 20 seasons under head coach Mike Bianco, Ole Miss has reached the NCAA Tournament 17 times and the super regional round seven times. It has only gotten to the College World Series once, in 2014. Six of their seven super regionals have gone to a Game 3, and the Rebels are now 1-5 in those deciding games.

“It’s not a secret we’ve struggled in those. We’ve been in seven supers in the last 15 or so years. We’ll just keep banging on the door until we get through again,” Bianco said. “It’s nothing specific. You can look at tonight and say we just played a really good Arizona team and showed some holes in our game, where we’re a little light on the mound. That’s not a secret. It might even show you how special it was to get where we are.”

Following Sunday’s loss, Bianco tried to accentuate the positive. The Rebels started the season ranked No. 4 nationally, then lost four consecutive Southeastern Conference series in April amidst a wave of injuries. They rallied to take their last two SEC series — including one against College World Series participant Vanderbilt — reached the semifinals of the conference tournament, and won a regional for the second season in a row.

Bianco said he was happy with the big picture, even if another super regional loss was a bitter pill to swallow.

“We had a bad day today, but we had a terrific year. When you look at all the adversity, all the injuries, all the things this team had gone through and continued to have success and never taking weekends off. This team did some things nobody really expected.” Bianco said. “If you look at the book covers — the very beginning and the high ranking and where you ended up — maybe you say they didn’t get there, and that’s a shame. But if you read the pages in between and know this team’s story, it’s pretty special.”

If this season’s ride was memorable, its ending was utterly miserable.

Arizona and Ole Miss split the first two games of the series, with each earning a blowout win. Arizona won 9-3 in Game 1, and Ole Miss rebounded for a 12-3 victory in Game 2. That set up the winner-take-all finale on Sunday night, and it followed the same pattern as the rest of the series.

Arizona struck first, on an RBI single by Tony Bullard in the first inning. Ole Miss tied it on a sacrifice fly by Cael Baker in the third. From then on, it was all Wildcats.

Jacob Berry and Ryan Holgate hit two-run home runs in the third and fourth inning, respectively. Holgate’s blast started a seven-run rally that put Arizona ahead 10-1, and the Wildcats added three more runs in the fifth on an RBI double by Donta Williams and a two-run single by Boissiere.

Boissiere also had a bases-clearing double in the fourth inning.

In all, Arizona had 11 of its 20 hits during the three-inning span when it turned a tie game into a 13-1 rout. All five of Ole Miss’ pitchers gave up at least one run in the game.

“They weren’t just hitting pitches down the middle. They were hitting really good off-speed pitches off the plate, down, almost in the dirt,” said Ole Miss catcher Hayden Dunhurst. “I was going down to block a few pitches and they were hitting doubles in the gap. Credit to them, it was just their day. That’s just how it was.”

Berry finished the game 2-for-4 with four RBIs and three runs scored, and Williams was 3-for-4 with one RBI and four runs scored. Kobe Kato had three RBIs.

All nine starters for Arizona either had a hit or scored a run. Bianco said the contribution from the lower part of the Wildcats’ lineup was the biggest difference in Sunday’s game, compared to the rest of the series.

Ole Miss scored three runs in the top of the first inning in Game 1, but let the lead gradually slip away. It won Game 2 with an outstanding offensive performance of its own, and then saw Game 3 spiral out of control.

While disappointed with their own performance, there was also little for the Rebels to do but tip their cap to the team that has scored more runs than any other in the country this season. Arizona has scored 10 runs or more in 26 of its 60 games, and improved to 25-1 in those contests.

“It sucks. It was our goal. We all fully expected to be there,” Ole Miss shortstop Jacob Gonzalez said of reaching the College World Series. “We just didn’t play our best today or even on Friday, and they played better than us.”