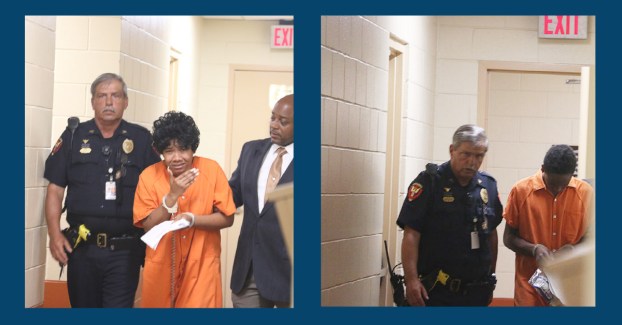 Two people have been charged with murder in the shooting death of Malik Vallarie, 21, of Vicksburg.

Laqesha Davis, 29, and Demarion Reed, 15, both of Vicksburg, are in custody. In addition to the murder charge, Davis will also be charged with instructing a juvenile to commit a felony.

At 2:33 p.m. Monday, a call was made to the Vicksburg Police Department that gunshots were heard near the Vicksburg Animal Shelter located at 100 Old Mill Road.

Once there, the officers discovered Vallarie in a wooded area behind the City of Vicksburg Animal Shelter. He was pronounced dead at the scene. A firearm believed to be used in the shooting was recovered from the scene as well.

According to VPD Capt. Mike Bryant, “several witnesses” interviewed and provided statements at the Vicksburg police station, which led to the two arrests.

Vicksburg Police Chief Milton Moore said juveniles having easy access to firearms is a contributing factor in situations such as Monday’s homicide.

“We here at Vicksburg Police Department are going to continue to try to take guns off the street, as we have been, but these gun owners have to be more responsible with their firearms,” Moore said. “These young kids think guns are glorifying. We continue to ask the public to please know where their guns are at all times.

“It’s going to take us all to encourage this nonsense to stop.”

Three firearms were stolen from vehicles, some unlocked, over the weekend. Moore said incidents where guns are stolen from unlocked cars are directly related to increased violent crime in the city.

Mayor George Flaggs, Jr. condemned the violence, saying his office has a renewed commitment to crime prevention — especially in teenagers and young adults.

“It’s unfortunate, with juveniles beginning to be part of tragic situations in Vicksburg, but we are confident that we will be moving forward with pathways that create inventive programs for our youth and young adults,” Flaggs said. “We should be careful with firearms and keep them locked up. We should never use a firearm the way they’re being used by our young people as of late.

“We’ve got to crack down on it and prevent more tragic situations from happening.”