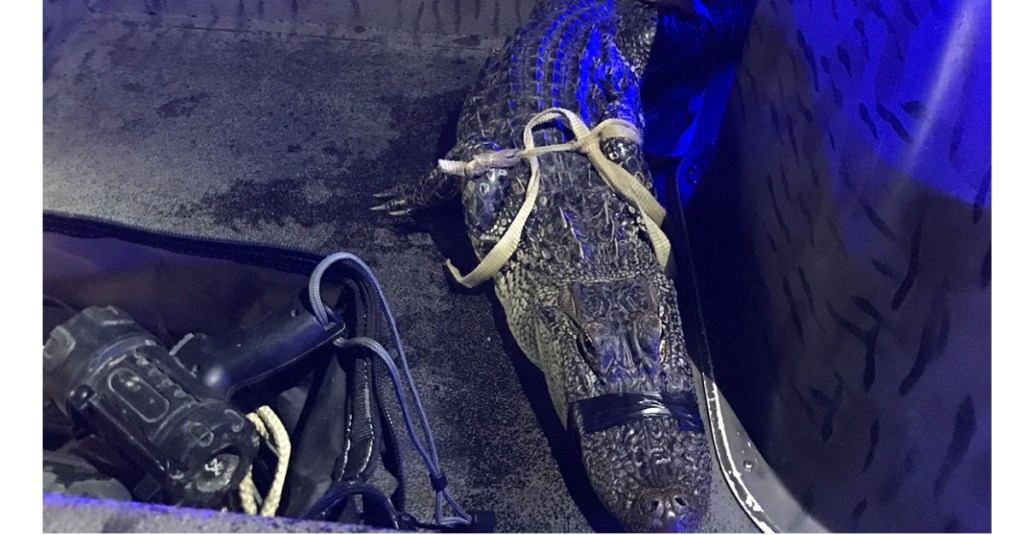 Al "The" Gator was successfully captured on Tuesday at the Openwood Plantation subdivision. The gator was then relocated. (Photo by Dan Henshaw)

A six-foot-long alligator, nicknamed Al “The” Gator, was wrangled from Openwood Lake and relocated on Tuesday night, under the supervision of a Mississippi Department of Wildlife and Fisheries contractor.

The alligator had been seen near homes for several months, according to residents, sunning in yards around the lake. It had interacted with some pets, but had not been aggressive toward them.

Openwood residents called the department of wildlife and fisheries, and a game warden made two attempts to catch the alligator, but to no avail, determining the alligator was “too big and aggressive” to capture without expert help.

That’s where contractor and alligator tracker Brad Martin came in.

“(Alligators) travel a lot over dry ground, and they don’t think anything about it,” Martin said. “They’ll follow these creeks, until they come to a lake they like, a suitable habitat.”

Martin said the alligator was likely not going to hurt anyone, but that he understood the residents’ concerns and was happy to provide services to ethically relocate the alligator.

“(People) are afraid of (alligators),” he said. “A six-foot alligator is not likely going to bother anyone. A small dog, maybe, but they’re usually after snakes.”

Snakes, Martin said, are one of the alligator’s favorite foods.

The initial search mission for the alligator began at 6:30 p.m. on Tuesday, but the rescue team was unsuccessful and determined it would be easier to find the alligator at night, when its eyes would glow in a spotlight.

Al “The” Gator was caught near the home of Dan Henshaw, who said he and his wife often watched the alligator sunning from their office window. He was safely relocated in a habitat far from a residential area.

Walter Frazier contributed to this report.