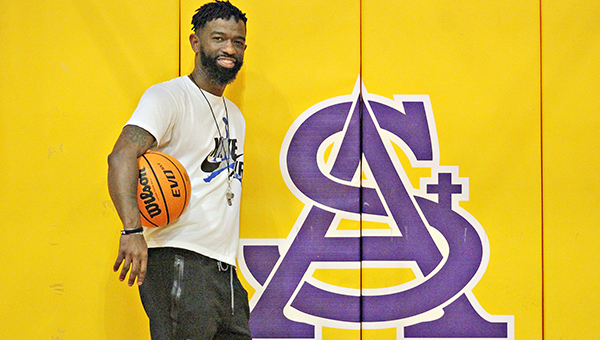 Championship banners line the walls of St. Aloysius’ gym, honoring the school’s athletic greats in nearly every sport and activity from cheerleading to golf, tennis, baseball and swimming.

Conspicuously absent, however, are the ones for basketball.
The only banners representing St. Al’s hoops teams are from a pair of district championships 14 years ago. It’s a noticeable hole in the sports resumé of a school that has had success in almost all of its athletic endeavors, and one that Anthony Lumpkin is hoping to fill.

Lumpkin was recently hired as St. Al’s next boys’ basketball coach. He’ll inherit a team that only won three games last season, but he has plans to change not only the team’s record but its status as a perennial also-ran.

“It’s definitely a culture to change, because I think they’ve gotten complacent with just being OK,” Lumpkin said. “Even starting with our practices, I’m just trying to change their mindset. We won’t allow ourselves to be mediocre. When they talk about basketball not just in the city of Vicksburg, but the state of Mississippi, I want our names in that conversation.”

Lumpkin, a Vicksburg native, is replacing Mike Coleman. Coleman coached both the boys’ and girls’ teams last season, and will remain as the girls’ coach.

Lumpkin, 42, played in various professional leagues overseas and minor leagues in the United States before seguing into a coaching career about a decade ago. He spent one season as the head coach at a high school in Jacksonville, Florida, then moved back to Vicksburg to be closer to family. His son, Anthony Lumpkin Jr., graduated from Vicksburg High School this spring and has signed to play basketball at Hinds Community College.

Lumpkin Sr. has also coached an AAU team, and said that was what led to him getting the job at St. Al.

“A couple of the parents reached out to me. I guess they’d heard about what I’ve been doing with my AAU organizations. They put me in touch with everybody, and here we are,” Lumpkin said.

Shifting gears from an AAU all-star team to a high school team that had a 3-15 record, he admitted, will be a challenge.

Where he hopes to go is to the top. One of St. Al’s brief flashes of basketball success came just two years ago, when they finished 17-11 and reached the MAIS Class AAA state tournament, so a quick turnaround is possible.

In addition to summer practices, Lumpkin said he plans to take the Flashes to a camp at Mississippi College next week. They played in another at Hinds last week. It’s the first step in building what Lumpkin hopes is a winner that can finally add some basketball banners to the ones surrounding them on their home court.