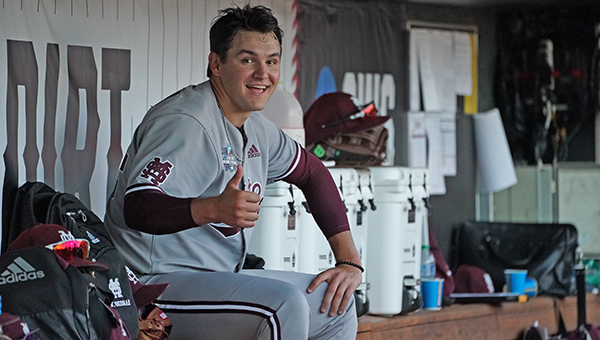 OMAHA, Neb. (AP) — As Will Bednar’s strikeout total kept climbing, it seemed everybody at TD Ameritrade Park was keeping track.

Bednar didn’t want to admit it, but he was, too.

“Uh, yeah,” he said sheepishly when asked. “I wasn’t trying to, but I kind of kept peeking up at the board.”

The redshirt freshman struck out a career-high 15 over six innings, the most at the College World Series in 25 years, and Mississippi State held off Texas 2-1 Sunday night.

Bednar and Landon Sims set a CWS team record by combining for 21 strikeouts, and the Bulldogs (46-16) ran their season total to 765, tying the Division I record.

Bednar’s total was the highest by an individual since Clemson’s Kris Benson struck out 15 against Miami in 1996. Bednar’s total is tied for sixth-most in College World Series history in a nine-inning game.

“I felt like it was a great performance, probably my best ever,” Bednar said. “On this stage, it’s real cool.”

No. 2 national seed Texas (47-16) put only four balls in play against Bednar — three flyouts and Mitchell Daly’s base hit up the middle in the fourth.

“Bednar, we still haven’t figured him out,” Texas coach David Pierce said. “He’s a spin rate guy and the ball just doesn’t lose plane, and it seemed like we were swinging underneath it the entire game.”

The Longhorns’ offense came to life in the bottom of the ninth against Sims. Mike Antico led off with a homer, and Ivan Melendez and Cam Williams hit consecutive two-out singles to put runners on the corners before Douglas Hodo III grounded out to end the game.

The Longhorns have lost their CWS opener in each of their four appearances since 2009. Pierce typically doesn’t address his team after a game, but he did this time.

“I know how emotional the game was, and they’re frustrated and feel like they let their teammates down,” he said. “My message: ‘We’ll continue to go to battle with guys that are preparing right, and we have to get better tomorrow. Don’t listen to the noise. We know what happened, don’t listen to the distractions of what happened and be tough enough to get over it.’ ”

Bednar (8-1), brother of Pittsburgh Pirates pitcher David Bednar, had pinpoint command with his low 90s fastball, working it on both sides of the plate and up in the zone and mixing in a slider down and out of the strike zone.

“I grabbed Will after the game and handed him the game ball and told him that’s one of the better performances ever here,” MSU coach Chris Lemonis said. “Six innings, one hit, 15 punchies. Not many guys have come here and done that because the talent level is so high.

“Some nights pitchers pitch great with the wind blowing in. But tonight the wind is blowing out, and he just didn’t give them any swings all night long.”

Bednar fanned seven in a row from the first to third innings and broke the school’s single-game CWS record in the fourth with his 11th strikeout.

He walked Zach Zubia to start the seventh inning and threw one more pitch, his 108th, before Lemonis called on Sims.

Bednar high-fived his way through a gauntlet of teammates on his way to the dugout while fans — many in Texas burnt orange — gave him an ovation.

“I wanted to stay in,” he said. “I was pretty mad when coach Lem came out. I trust Landon, and I got back on the (dugout) fence and yelled at Landon to keep it rolling.”

The hard-throwing reliever picked up where Bednar left off, striking out the first five batters he faced. He finished with six strikeouts.

Mississippi State, the No. 7 national seed making its third straight CWS appearance, picked up both its runs in the fourth off Ty Madden (7-5). The first came home on a sacrifice fly and the other when Brad Cumbest sent a fly down the right-field line that landed just in fair territory. Hodo couldn’t make a play, and Luke Hancock scored from first on Cumbest’s triple.

Cumbest’s triple was Mississippi State’s first in a CWS game since 1985.

Madden struck out 10 in seven innings, and the teams’ 33 combined strikeouts set a CWS record.

Mississippi State has struck out at least 10 batters in six of its seven NCAA Tournament games and in 49 of 62 games this season.

The Bulldogs’ 21 strikeouts moved State past Ohio State’s 20 strikeouts against Washington State in a 15-inning game in 1965.

“I was telling some of the guys we’ll look up in a couple years and see all those guys pitching in the big leagues,” Lemonis said. “There are some special arms, special competitors on both sides.”

Mississippi State advanced to the winners’ bracket to face Virginia Tuesday at 6 p.m., while Texas will play Tennessee in an elimination game Tuesday at 1 p.m. Virginia beat Tennessee 6-0 earlier Sunday.

What if I told you … that the state of Mississippi would be within one walk-off home run of hosting... read more