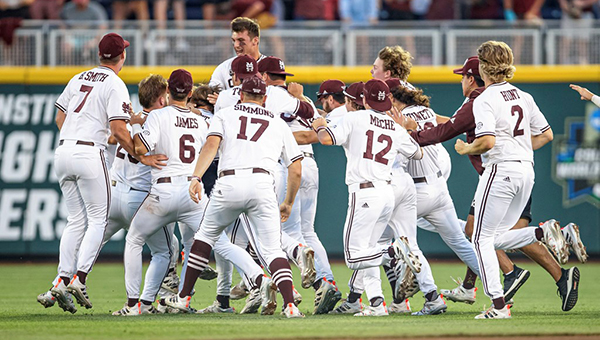 The Commodores were supposed to play North Carolina State in a winner-take-all bracket final Saturday and found out 12 hours before the start that the Wolfpack had been removed from the tournament because of COVID-19 protocols. The game was declared a no-contest.

“We certainly sympathize with their team, their fan base, too, understanding that we don’t know the level of hurt that they are exposed to right now, but we certainly recognize it,” Vandy coach Tim Corbin said Sunday.

“None of us wish to be in this particular position. We certainly would want to play them on the field or have played them on the field, but we didn’t. So we are in the situation where we move forward.”

Vanderbilt is the reigning national champion, having won the CWS in 2019. There was no tournament last year because of the pandemic.

The No. 4 national seed Commodores (48-16) are at this point after winning two elimination games, most recently 3-1 Friday against a North Carolina State team that had only 13 players available.

“We’re here for a reason,” first baseman Dominic Keegan said. “We earned our spot here and we got here because of our abilities and what we can do.”

The No. 7 Bulldogs (48-17) played two bracket finals against Texas, winning 4-3 on Saturday on Tanner Leggett’s walk-off base hit. It was the third consecutive CWS game in which the Bulldogs scored the tying or winning run in the eighth inning or later. They’ve won five one-run games in the postseason.

“Our guys have fought since the day we got here,” Mississippi State coach Chris Lemonis said. “We haven’t had an easy game yet. It’s been very tight, tough ballgames. But, man, they keep finding a way to persevere. It’s been earned by our guys and I look forward to seeing them play on this stage.”

Vanderbilt won two of the three regular-season meetings with Mississippi State in Nashville in April. Vandy’s Kumar Rocker, a possible top-10 pick in the Major League Baseball draft and the 2019 CWS Most Outstanding Player, pitched a three-hitter in the first game of that series and could be available if the finals go three games.

Mississippi State will start Christian McLeod in Game 1. He’s made one appearance in the CWS, lasting just 1 1/3 innings and giving up four runs in a 6-5 win over Virginia last Tuesday.

Corbin wasn’t ready to announce his Monday starter. National strikeout leader Jack Leiter, a projected top-five draft pick, would be up next in the rotation. Leiter, who threw 123 pitches in a win over North Carolina State last Monday, took his first loss of the season in the second game against Mississippi State in April after allowing four runs in five innings.

The Commodores have used Thomas Schulz, Christian Little and Jack Reilly in the No. 3 spot in the rotation at various times. Mississippi State saw Reilly in April and knocked him out of the game in the first inning, although Vanderbilt wound up rallying for a 7-4 win that clinched the series victory.

“We’ll probably be facing the best arm in the country. He’s (Leiter) an unbelievable talent. He’s a great guy and can really compete. We’ve got our hands full. Like I said, we knew this wasn’t going to be easy,” Mississippi State outfielder Tanner Allen said. “So we’re just going to prepare today and have a good practice and BP, and then really have a good scouting report tomorrow morning and just go into the game with confidence because we’ve been playing great baseball lately.”

Lemonis dismissed any suggestion that this year’s championship would be tainted because Vanderbilt made the finals without completing bracket play, albeit through no fault of its own.

“The way that we came through it and the games that we’ve had to play — and now you’re having to play Vanderbilt — there will be no asterisk for us,” Lemonis said. “And I hate it for N.C. State. I have three coaches who worked for Elliot (Avent) on my staff. I have a long relationship with Elliot. My nieces and nephews all went to N.C. State. I have a lot of respect there. …

“But for our guys, that stuff’s out of our control. All we can do is show up and play, and whoever is in the other dugout we compete against.”

Mississippi State has begun using a back entrance to enter and leave its hotel as a precaution against COVID-19. Lemonis said the move was made in response to the Wolfpack’s virus issues.

The Bulldogs have brought a large group of fans to Omaha, and players mixed with them until Friday.

“The last couple days, we haven’t signed autographs or shaken hands,” Lemonis said. “We’re trying to be as protective as we can. The first couple nights we came to our lobby, thousands of people, it’s the best part of winning a game out here.”

Corbin said Vanderbilt has not altered its coming-and-going routines at its hotel.

Corbin didn’t answer directly when asked if he could require his players to be vaccinated because Vanderbilt is a private university. That wouldn’t be the case at public schools such as North Carolina State and Mississippi State.

“I’ve spent a lot of time educating the group what this process could look like at the beginning of the year,” Corbin said. “We are certainly comfortable with where we are and what we’ve done.”