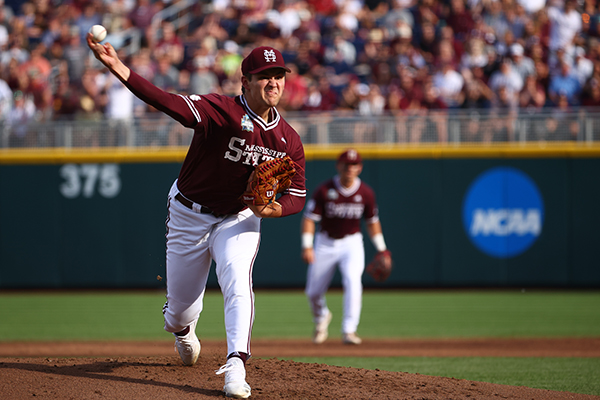 Pitching was the difference in Bulldogs’ run to the title

Vanderbilt rolled through the regular and postseason on the strength of its two pitching aces. Jack Leiter and Kumar Rocker, both likely top 10 picks in next week’s Major League Baseball draft, accounted for half of the team’s 49 wins and tied for the national lead in strikeouts.

They were no match, though, for Mississippi State’s own dynamic duo and their relatively anonymous supporting cast.

Will Bednar and Landon Sims combined on a one-hit shutout in Wednesday’s 9-0, national championship clinching victory over Vanderbilt in the College World Series. Their effort capped an impressive run by the Bulldogs’ pitching staff that carried the team to its first national title.

Bednar was named the College World Series’ Most Outstanding Player and emerged as a superstar during his three starts in Omaha.

The sophomore right-hander struck out 15 batters in a 2-1 win over Texas in the CWS opener, followed it up with another solid performance against the Longhorns in the bracket final, and then turned in a legendary performance when it mattered most.

Pitching on just three days’ rest, Bednar did not allow a hit in six innings Wednesday against Vanderbilt. He walked three batters in the first two innings and then retired 15 in a row before handing the ball to Sims.

In his three CWS starts, Bednar allowed three runs and had 26 strikeouts in 18 1/3 innings.

“He’s coming in, and he is ready to go. And, I mean, just the opening game against Texas, just every time he’s taken the ball here in the postseason, he’s just been a champ,” Mississippi State coach Chris Lemonis said. “And you need somebody to get hot for you in the postseason. And we had that with Will tonight.”

Sims was just as good on the back end of games. The Bulldogs’ closer allowed one run in 10 innings spread across four CWS appearances, for a 0.90 ERA. He walked only one batter and struck out 14.

Sims got the last nine outs in Game 3 against Vanderbilt to earn his 13th save of the season, tied for fourth in Division I. Sims’ last three saves came in Omaha, and he earned a win in his other appearance.

“If you go back over the year, we gave him the ball in so many big moments, I don’t think he ever lost a lead,” Lemonis said. “I mean, he’s been just phenomenal. He was phenomenal here. And really we didn’t have to use him, crazy use him during the year, but, man, during this last month he’s had to take the ball a couple of times when he’s fatigued and he still just competes.”

Bednar and Sims headlined Mississippi State’s pitching staff, but a number of others played key roles during the College World Series.

Seven relievers combined to allow one run in a come-from-behind victory over Virginia during the bracket round, after starter Christian MacLeod was knocked out in the first inning.

MacLeod struggled again in Game 1 of the championship series, but five relievers followed him to keep Vanderbilt in check over the last seven innings. In Game 2, Houston Harding and Preston Johnson combined to allow two runs in a 13-2 victory.

Johnson’s extended outing in Game 2 earned particular praise. He worked five innings in the blowout, which allowed Lemonis to rest the other pitchers — and Sims — for the winner-take-all finale.

In all, Vanderbilt scored seven runs in the first inning of Game 1 and three over the next 25 innings.

The only thing the Bulldogs’ pitchers didn’t do was finish a no-hitter. They made it into the eighth in Game 3 against Vanderbilt before Carter Young broke it up with a one-out single off of Sims. By then the Bulldogs were ahead 9-0 and entering celebration mode, which made it much easier to take.

“I’m sure I’ll probably bust his chops tomorrow,” Bednar said. “But we won the national championship. I don’t really care all that much. I really couldn’t care less about that right now; I’m on cloud nine.”

STARKVILLE — The Fourth of July won’t be the only celebration in Starkville this weekend. Mississippi State University announced it... read more