Sports column: This championship was for all of us 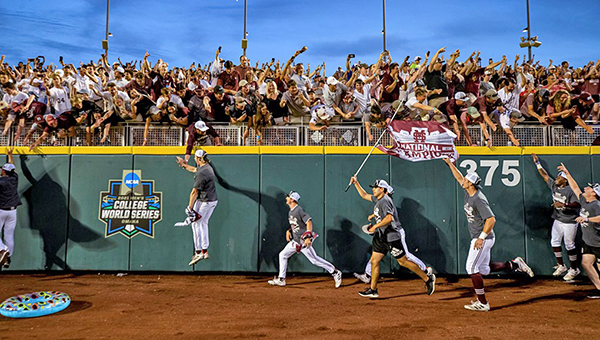 As the 2021 College World Series progressed and Mississippi State kept winning games to get deeper and deeper into the tournament, the event became a showcase for the university.

Back home, fans grew more and more excited at the thought of finally ending years of frustration and disappointment in a sport they’ve embraced like few other places have.

By the time the Bulldogs finished off Vanderbilt 9-0 on Wednesday night to win their first national championship not just in baseball, but in any sport, the party was on and one thing was abundantly clear.

Mississippi is often maligned by the rest of the country, and not without good reason. We rank in the bottom five or 10 of the 50 states in most statistics, we have a dark and violent past we’re always trying to redeem ourselves for, and a general inferiority complex permeates the state. No matter what we do, or how good we do it, it’s hard to gain respect.

That attitude trickles down to our sports teams. The biggest claim to fame for Mississippi State football is spending a few weeks ranked at No. 1 back in October and November of 2014, which is like bragging about leading in the third quarter of a game you lost by 10 points.

Mississippi State, Ole Miss and Southern Miss all have great baseball teams but never seem to find that extra gear to punch through the last barrier in the postseason.

Mississippi State showed, finally, that one of our teams — and by extension all of us — are capable of winning the big one. The Bulldogs won with grit and class, and the fans cheering them on in Omaha showed a remarkable passion. They, and we, have won the right way and can be proud of the path taken to this championship.

For once, for at least a few days until the buzz wears off, we have a championship. We have respect. We can be proud of not only our team, but ourselves. These weeks in June, this feeling of unbridled joy, will be remembered forever.

“When you go to Starkville, Mississippi, and you’re around 20 years from now, they’ll be remembered by everybody,” Mississippi State head coach Chris Lemonis said after Wednesday’s win.

Not just in Starkville, coach. Everywhere.

Whether you consider yourself a Rebel, Golden Eagle, Statesman, Brave, Tiger, Choctaw, Major or Blazer you would have to have a bitter heart of stone not to smile and be a Bulldog for a few days. This championship is for all of us.