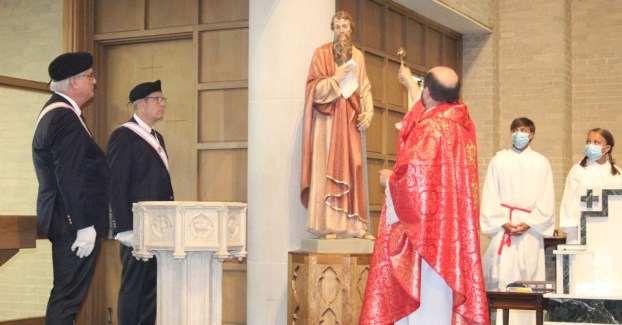 PHOTO CUTLINE: Fr. Rusty Vincent blesses the statue of Saint Paul which was added to the sanctuary of Saint Paul Catholic Church in Downtown Vicksburg on June 27. (Photo by John Surratt | The Vicksburg Post)

A statue of St. Paul Catholic Church’s patron saint now graces the church’s sanctuary, and the story behind its arrival begins with a new pastor and a donation left to the church’s altar society.

Not long after he arrived at St. Paul Catholic Church as pastor, the Rev. Rusty Vincent was approached by Janice Waring with a gift from the church’s altar society.

“Some money was donated to the altar society years ago and it had been in a CD for many years,” said Waring, who was altar society treasurer.

Interest in the altar society had been waning for several years and two years ago the group disbanded with the money still in the bank.

“I went to Father Rusty and said we want to do something with it but we don’t want to piecemeal it out,” Waring said. “What is something we may need.”

Vincent noticed the need. The church had statues of Jesus and Mary but there was no statue of the church’s patron saint, St. Paul the Apostle.

“Since the church didn’t have a St. Paul statue and we were named St. Paul’s, I thought that was the best thing to do,” Vincent said.

The decision led to a two-year process to find a statue of St. Paul that ended with the T.H. Stemper Co., which specializes in supplies and reconditioning and making statues for churches, making the statue.

When she first saw the statue, Waring said, “It was a white statue but the manufacturer put us with an artist and when it was finished it looks like wood. We were very pleased.”

Parishioner Charles Hahn made the stand for the statue using the old church organ’s wood pipes.

“He is the patron saint of the church, it is named after him and the saints in heaven are already with God so they’re interceding on our behalf; they’re praying for us to get to heaven,” Vincent said of the statue’s significance to the parish.

“When you name a church after a saint, you have a special connection with that saint whose praying for us to get to heaven and interceding on our behalf,” he said. “St. Paul’s life as a saint, whether it be his conversion or martyrdom, is all to encourage us to live the life of a saint as he did.

“He was caught up in the zeal for the Jewish faith,” he said. “He was very passionate about it but at the same time too, he was very misguided in the sense of the fact that he thought he was right but he was living it out in a cruel way.

“Then he had his conversion; he had that vision of Christ that’s seen in the Acts of the Apostles and the changed him completely; he was devoted to Christ from that day forward, even to death. It was amazing the change he went through,” Vincent said.

The quick response by three Warren County sheriff’s deputies early Saturday morning prevented what could have been a tragedy during... read more