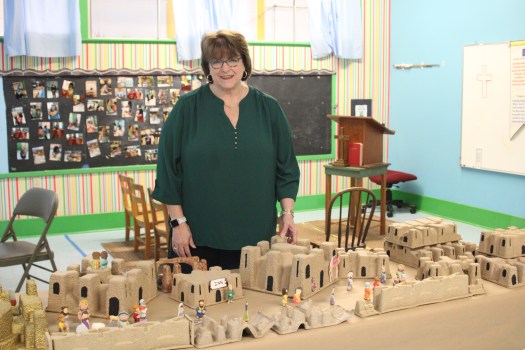 Sunday school teacher Linda Turner stands behind the small town she built for the Sunday school classes. The town, which resembles a town during Jesus' time, is used to help teach the children about the Bible. John Surratt 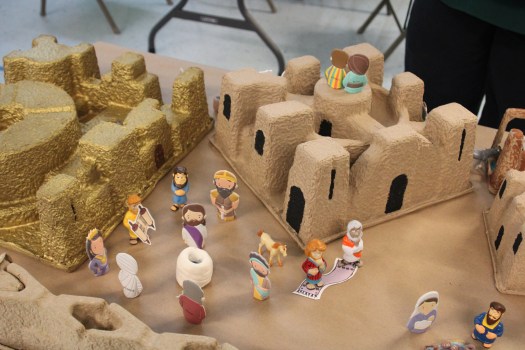 People gather around the well in the town. The children in the class brought small figures of people and animals and made wells and miniature clay pots for the town. John Surratt 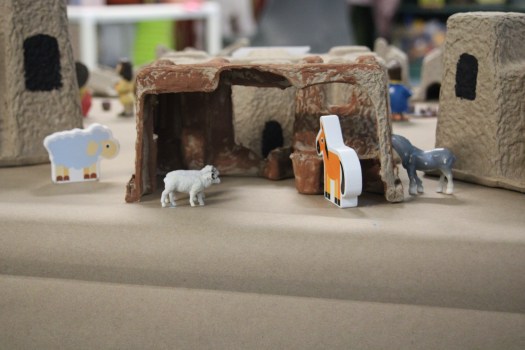 An empty stable sits behind an inn. The stable is part of the town, which now serves as Bethlehem to teach the children about the first Christmas.

Inside a classroom at Crawford Street United Methodist Church, a small collection of cardboard buildings resembling a town that would have existed during Jesus’ time sits atop a table in the room’s center.

Its population is comprised of small figures in first-century Middle Eastern dress and includes an assortment of animals. Originally built to resemble Jerusalem, it has been renamed Bethlehem to help the children learn about the first Christmas and Jesus’ birth.

The city is the work of teacher Linda Turner, who got the idea from a project she saw on the Internet after the children’s Sunday school resumed in April.

“We were going to take on the multiple ages and they put this table in the middle of the room to divide the room,” Turner said.

The table, she said, had a large plastic Noah’s Ark with no animals in the middle of the table and she and fellow teachers Robyn Lea and Sylvia Gurtowski decided they wanted something better. Turner began her search.

She saw an item on the Internet where a group built the wall of Jerusalem out of cardboard boxes and brown paper. But the wall was not what got her attention.

“Sitting beside the wall was some packing material, and I thought that looked a lot like a building,” she said. And the city was born.

“I put a call out on social media for cardboard packaging material that people might be throwing away and that’s how it evolved,” she said.

A black marker was used to draw in windows and the temple was spray-painted gold. There is also a wall of Jerusalem.

The town is not attached to the table Turner said, and the children “move it all the time. The children brought in little animals from their houses; they’ve added little things to it. The children made the little clay pottery that is in there and the water wells. The children added the accessories.”

Turner said the teachers use the town to teach the children about the Bible. Because the town is now serving as Bethlehem, it has an inn with a stable behind. Sunday’s lesson, she said, is about the shepherds, and part of the town will be moved to provide a spot for the shepherds.

“We really try to stick to the Bible because the knowledge the children have primarily comes from the stories they hear,” she said. “We’re really trying to give them something Bible-based.”

Since the town has been built, Turner said, it has been used for a lot of different activities.

Turner said she doesn’t know how long the city will remain.

“We put it up in September, so it’s still fairly new,” she said. “The kids bring things and add to it. As long as they’re interested, we’ll keep moving it in and around and changing things; we’ll use it as long as it fits our story, and then we may put it away and pull it back out.”