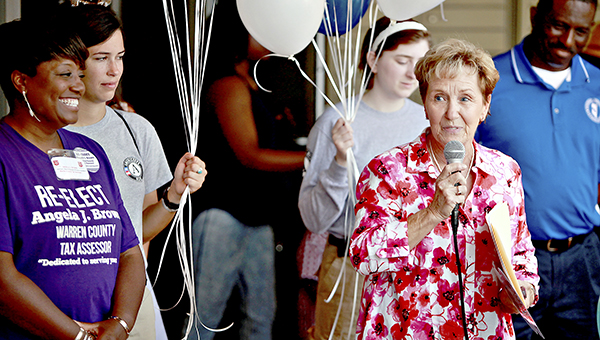 Margaret Gilmer speaks during the 20th anniversary celebration at the Outlets at Vicksburg in 2017. (Justin Sellers/The Vicksburg Post)

Margaret Gilmer, a longtime businesswoman in the Vicksburg and Warren County community as well as past president of the Port Commission, died on Jan. 2.

“She’s meant a lot to a lot of people,” Wooten said. “I don’t know what I could say about my mother that would do her justice. She was a workhorse in every waking moment and she was a workhorse until the last moment she laid her head on the pillow, and it was all about making this community better. She was always right there, and always ready to help.

“We know that everybody’s going to miss her,” Wooten said. “She’s got big shoes to fill. She carried a huge workload, and not many people can carry that huge workload — she really never quit.”

Gilmer was 77 years old. In addition to her children and grandchildren, she is survived by her husband, Leon Gilmer. The couple would have celebrated their 60th wedding anniversary on Jan. 11. They had been together since they were children, Wooten said.

“She was his first girlfriend, and he was her first boyfriend,” she said.

Wooten said her mother died due to complications from pneumonia following a recent cancer diagnosis.

“Many of us knew (Gilmer) for her many years of service to causes of great consequence to our beloved community. As a result of that work, Vicksburg and Warren County are today in a better position than they have been in a long time,” Diaz said. “She was a tireless worker bee and loved the Chamber and its mission. She preached to all who would listen that it is our responsibility to build, sustain, and invest in our community.

“To put it simply she would say, ‘You get from your community what you put in it, and you get even much more when you do it selflessly,'” he said. “Those of us who knew her on a personal level gained invaluable life lessons about honesty, hard work, and selfless service. She leaves an enormous void, but more importantly an inspiring legacy that will illuminate the way forward for many of us.”

“Our thoughts and prayers are with Mrs. Gilmer’s family in these difficult times,” Kyser said. “Mrs. Gilmer worked very hard to help reinvigorate the EDF and to make it into an organization that is effective in building a better future for everyone in Warren County. She will be greatly missed in our board  and in the business community.”

“Vicksburg has lost one of its greatest cheerleaders,” Brown said. “Margaret was a strong advocate for the betterment of this whole community, not just a portion. She gave so much of her time,  talent and resources. She was also a great friend. I will personally miss meeting with her about business and community matters. She loved her family so much and had great faith in our Lord. Our thoughts and prayers are with Margaret’s wonderful family friends.”

“Mrs. Gilmer was one of the most active members of the Chamber of Commerce and was always there to help plan, execute, and advance the goals of the organization,” Hearn said. “There was never a job that was too big or too small for Mrs. Gilmer. She would just work and find a way to be helpful regardless of the task. Her spirit of service will be  present in our work at the Chamber as we go forward, and we wish her family peace and  comfort during this difficult time.”

Gilmer was the general manager of the Outlets of Vicksburg and owned portions of the land on which the center sits. At the Outlets’ 20th anniversary celebration, she reflected on the shopping center’s success.

When first trying to grow interest in the outlet center, Gilmer said she and her partners would travel to national conventions and pitch to retailers. Most retailers had heard of Vicksburg, but once Mississippi was mentioned, they often lost interest, Gilmer said. However, they were persistent.

“One of my partners and I dressed up in antebellum dresses and manned the booth,” she said. “We thought we were going to a trade show.”

The opposite turned out to be true. Gilmer said the meeting was very male, very black-tie and very retail.

“When we rented our booth space, we were on the back aisle in the back corner and we had on our antebellum dresses,” she said. “We made Mississippi mud pie and we served mint juleps. The consultant we were working with told us it would be great if we did that, but she didn’t mention no one else would be doing anything like that.”

Gilmer said all the retailers and developers came to see them at what ended up being the busiest booth at the meeting.

“There was just something about Vicksburg that they all like,” she said. “I’ve never had a retailer that came that did not love the area. If there were ever anything that would make you be totally committed to an area, it would be all the national retailers sending their site selection people and every time they would go, ‘This is amazing.’”

“She will be sorely missed in our community. (Gilmer) was a phenomenal entrepreneur, a phenomenal business person and she was phenomenal in the way she cared so much about Vicksburg moving forward,” Flaggs said. “It is a tremendous loss for our community, and I’ve been in contact with her family daily.”

During Monday morning’s meeting of the Vicksburg Board of Mayor and Aldermen, South Ward Alderman Alex Monsour proposed to name the South Frontage Road extension bridge for Gilmer. As someone who spent years advocating for the completion of road linking the east and west ends of South Frontage Road, Monsour said he thought it would be a fitting memorial for a dear friend and colleague.

“‘Miss Margaret,’ as she was known by everyone, was not only a great supporter of the city of Vicksburg and Warren County,” Monsour said in the meeting. “…(Her impact) will not be measured on what she did while she was here, but it will be measured by generations to come. I have truly lost a good friend and champion of our city and state.”

Richard Cowart, property owner and developer and real estate agent, said Gilmer had a knack for being a sharp businesswoman as well as a good friend.

“(Gilmer) was one of the most hardworking and caring persons I have ever known,” Cowart said. “Whether it was trying to bring a shopping center to Vicksburg, sell real estate, promote Vicksburg and Warren County or just helping someone in need, she was always there.

“Vicksburg and Warren County has lost someone that cannot be replaced.”
Donna Cook, who retired from Hinds Community College as Marketing Instructor and DECA Advisor, expressed gratitude for the ways Gilmer helped her students over the years.

“When we would travel to the international DECA conference, she made sure to be involved and we were benefactors of the Shopping Extravaganza at the outlet mall for a number of years,” Cook said. “She was a coworker to me, because she offered outside classroom learning for all my students. She made sure I had a good working relationship with the store managers at the outlets and that made my classroom the best it could be.”

Mark Buys, who served with Gilmer on the chamber of commerce board of directors and was the board president prior to Gilmer, said he will remember her best as a good friend and excellent businesswoman — someone he’d known for more than 35 years.

“She was an excellent businesswoman and really enjoyed the free enterprise system,” Buys said. “We made numerous trips to Washington, D.C., on economic development ventures, and a lot of money came back to Vicksburg on those trips. She was a key person in the resurgence of the EDF and the Partnership, and her passion for this community was relevant.”

“She was such a mover and shaker for Vicksburg. When I was the coordinator for work-based learning at Hinds Community College, she was on my advisory committee,” Flowers said. “When we had a push for career and technical learning, she was very involved in that.

“As a member of the committee, Margaret was always the one that did something; she didn’t just sit in a chair and say ‘yea’ or ‘nay.'”

Flowers also discussed Gilmer’s influence on her professionally throughout Flowers’ decision to retire and pave the way for the formation of the Vicksburg-Warren Economic Development Partnership.

“One of the days I remember is when she came up to my office. She mentioned the Port Commission sharing some space with the Chamber. I remembered years and years ago, when the chamber and port and EDF were joined and how effective we were,” Flowers said. “I had toyed with the idea of retiring from the chamber, and that’s what I think spurred us on to getting organized together, that they could go ahead and change up the (Executive Director) job description to encompass the chamber, port and EDF.

“It’s a loss to Vicksburg,” she said. “I hope somebody tries to fill her shoes, but that will be very difficult to do. We’ve lost a good one.”

Arrangements are Friday at First Presbyterian Church. Visitation is from noon to 2 p.m. with services following. Interment will follow the service at Greenlawn Gardens Cemetery.