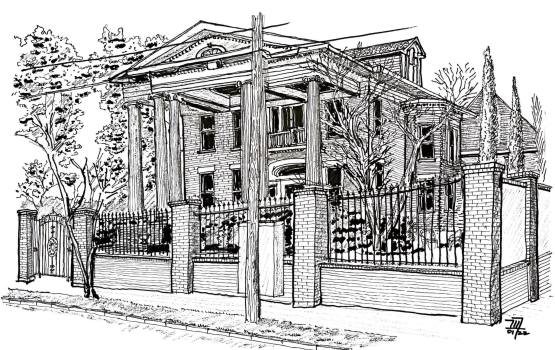 This Greek Revival home stands on the corner of Cherry and Belmont Streets. (Rendering By Michel Thakur) 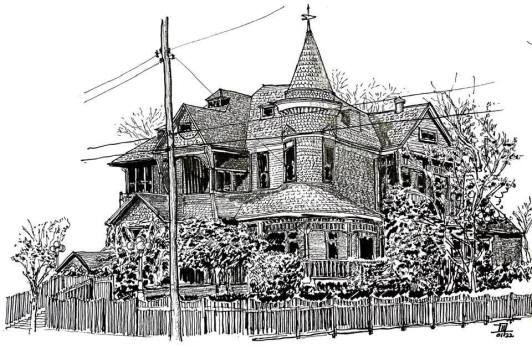 This home located in the 2300 block of Drummond Street is the largest example of Queen Anne architecture in Vicksburg. (Rendering By Michel Thakur) 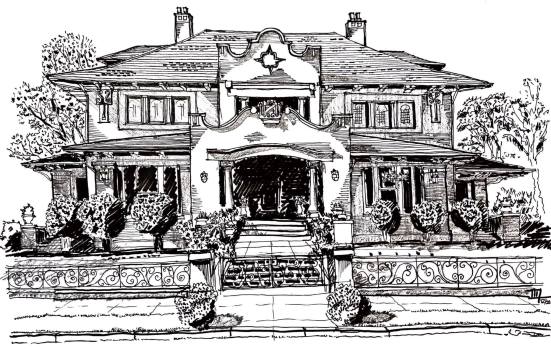 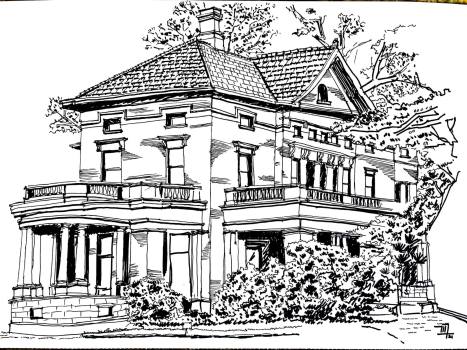 This stone home features a Spanish tile roof, located at the intersection of Hall's Ferry Road and Cherry Street. (Rendering By Michel Thakur)

Michel Thakur is the owner of the Pizza Inn on Clay Street, but when he isn’t overseeing operations at the restaurant, he’s engaged in his latest artistic pursuit: architectural drawings of historic homes and buildings in Vicksburg.

Thakur sat at a table in the Pizza Inn dining room. In front of him was an array of rendered pen and ink drawings. The subjects are historic buildings and homes of Vicksburg.

They include the old courthouse, the bridges spanning the Mississippi River, and an historic old home on Drummond Street.

“(These drawings) are technically called ‘perspectives,’” Thakur said. “That is the technical term for the type of drawing you learn (to make) as an architect.”

Thakur was trained in architecture in India, where he was born and raised. He worked professionally as an architect in Orlando, Fla. before he and his wife moved to Vicksburg.

Rendering, Thakur said, is an art. When he was studying architecture, he devoted hours to honing his skills.

“We had art classes. In India, where I’m from, for my particular course we had to do 500 sketches a year, just to make you good at converting your ideas to (a representation) on paper,” he said. “Whatever you think, you need to be able to precisely present (it) on paper — especially the rendering part that you see here.”

In terms of technique, Thakur said he generally works from photographs he takes of buildings and then uses the photos to draw perspectives at home.

The work is all done with felt-tipped Micron pens on white paper. He said he prefers not to use color in his drawings.

“You can probably enhance the beauty of the picture by putting in colors, too, (but) there’s something you know, very historic about it being monochrome,” he said. “Having one color, it brings out the nuances of the building.”

Thakur said this is an art form that has been largely replaced by computer renderings.

However, back when he was learning and working in the 80s and 90s, Thakur explained, everything was done by hand.

He described the high level of precision required to make the kind of drawing required for his architectural career. To make a single ink-and-paper perspective of professional quality for a client could take 12 to 15 hours.

“(That work) is very painstaking. Maybe that’s why people are more attracted by those sketches, because nobody uses them nowadays,” Thakur said.

This current series of drawings is the result of what he described as “just a hobby.” On average, he said he spends a less-demanding four to five hours each, “depending on the detail.”

Thakur said he started doing the drawings when the COVID-19 pandemic began. The Pizza Inn was closed for a week or so, giving him some more free time.

When choosing his subjects, Thakur said he doesn’t have hard and fast rules.

“I don’t have a system,” he said. “It’s random, whatever attracts me or looks nice.”

He described the series as a sort of “informal registry” of Mississippi architecture.

Thakur also has a master’s degree in city planning, and spoke about the potential Vicksburg has given the historic importance of the town and its architecture.

“There are a lot of old houses in this town, and somebody needs to take care of them. I don’t know where the money’s gonna come from, but there’s a lot of history,” Thakur said. “Because that’s the most profitable thing (about) Vicksburg being a tourist town — that you need to preserve this. Otherwise, people are going to move out.”

When Thakur started posting his work on social media, he said he received enthusiastic responses, and even had individuals asking if they could pay to have their house drawn.

When asked if he was interested in doing commissions, he said not really, because it’s just a hobby. Instead, Thakur said he plans to continue his art in Vicksburg, and perhaps draw historical buildings in other parts of the state, such as Natchez.