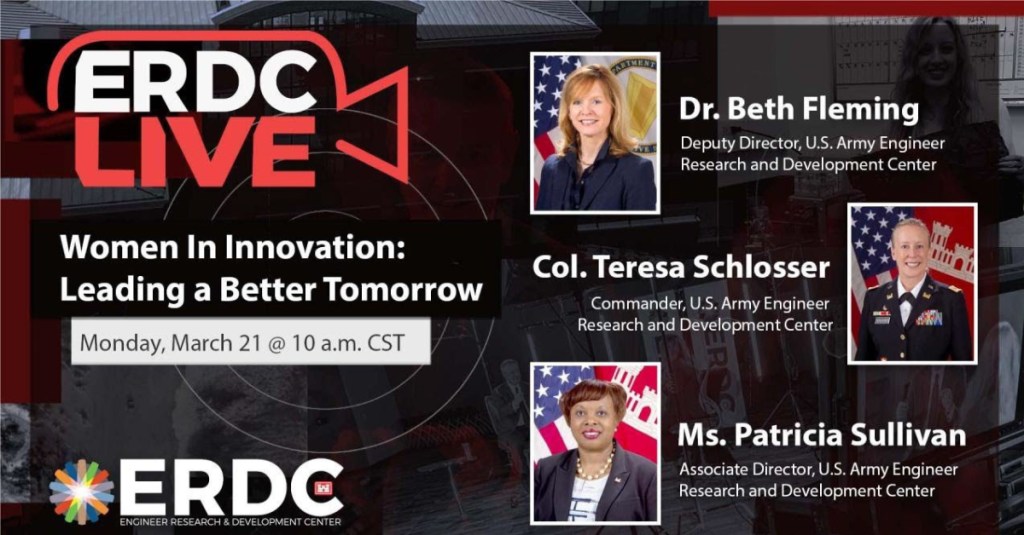 In honor of Women’s History Month, the program was titled ‘Women in Innovation: Leading a Better Tomorrow.’

The discussion started with a question from a local high school student for Schlosser. Schlosser was asked how she stayed mindful of who is and is not represented in decision-making at ERDC.

“I know I have the opportunity, and I always need to take the opportunity, to increase the diversity in gender, in experience, in background, lifestyles, (and) nationality if possible,” Schlosser said. “Because I need as many different ideas and different viewpoints as I can get, (so) that we can come to the best solution.”

The panel also discussed the changing role of women in the STEM fields (Science, Technology, Engineering and Mathematics).

“It is so exciting, the change that I’ve seen,” Fleming said. “In ERDC and across all of the stem fields in terms of women and their participation, it has just been incredible.”

Schlosser noted the increased number of women in leadership roles in STEM fields and at ERDC.

“As we watch more senior women leadership come in, it’s because we started out all those years ago,” she said. “It takes time to create leaders, so I expect to see more and more women leading in STEM.”

The panelists were also asked in several ways to give advice to young women and girls watching. Sullivan was asked what behaviors or traits she thought should be avoided by women in leadership positions.

“Self-doubt… There will always be someone who will doubt you in your life, but the thing is, don’t let it be you.” Sullivan said. “Don’t doubt that you’re there for the skills, talents, and abilities that you bring to the table. I think that’s key, particularly for women leaders.”

The panel also discussed the variety of work being done at ERDC. Tingle asked Schlosser to describe the events surrounding ERDC’s development of mobile intensive care units earlier in the COVID-19 pandemic.

“I believe it was a Monday, and I got a call from General Semonite, the Chief of Engineers, he said ‘Hey, we’ve got this idea, but we don’t know if we can make it come to fruition,’” Schlosser said. The idea was to use “shipping container(s), to make modular intensive care units because hospitals were potentially running out of space for intensive care patients.”

They had a 72-hour deadline to create a prototype.

“We called our shop guys, who are machinists, welders, carpenters, electricians, they’re tradesmen,” she said. “We contacted a shipping container company and said, ‘We would like to destroy one of your company’s containers in the interest of science.’”

In about 36 hours, the team had developed the prototype intensive care unit made out of a shipping container and locally procured supplies.

“It worked,” Schlosser said. “And it was amazing. And it was very fast.”

Sullivan also highlighted the variety of those opportunities.

“We need diversity in thought, we need diversity in gender, diversity in ethnicity and different backgrounds and cultural experiences, particularly at ERDC,” she said. “Because in order for us to be competitive, and be innovative and creative, and (to) have ingenuity, we’ve got to have (those) at the table.”