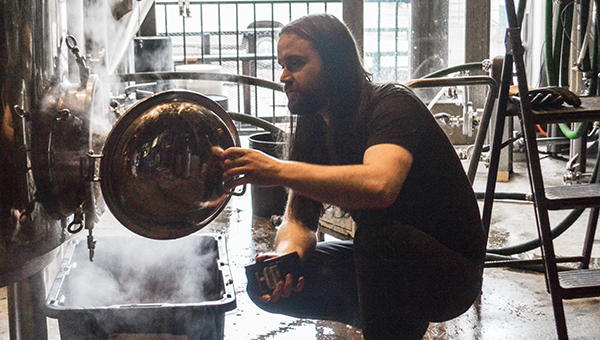 Key City Brewery will celebrate its four-year anniversary this Saturday, beginning at 11 a.m. at the brewery during downtown Vicksburg’s ‘Second Saturday’ event.

The celebration will have a “late 60’s, summer of love, psychedelic” theme according to owner and founder, Zack Erickson.

The celebration coincides with a rebranding of the business. Cottonwood Public House and the Key City Brewing Company will now be formally combined and known as the Key City Brewery and Eatery. According to Erickson, the decision was made partly because of the coming expansion of brewing operations.

“Key City is about to grow for the first time beyond the walls of this building,” he said, “beyond the city lines of Vicksburg, beyond the Warren County Line (and) entering the market, statewide.”

Construction is currently underway for thae planned expansion of Key City. It will be directly connected to the restaurant in the adjacent building, and will roughly double the square footage of the ground floor.

The extra floor space is planned to be entirely devoted to beer production, which Erickson said he expects to ramp up tenfold.

The wall currently separating the existing space and the expansion is planned to have large windows so restaurant-goers can see the brewing operations.

“We hope to do tours when it’s all up and running,” Erickson said. “(We’ll) get to show people all the shiny, fun equipment.”

The increase in production is directly related to plans for the company to change its brewing license type. Currently licensed as a ‘brewpub’ by the state of Mississippi, the change would designate the operation as a ‘microbrewery.’ The new license will allow Key City to distribute to stores and other restaurants across the state.

“The goal is to introduce more people to the awesome beer that’s being made here in Vicksburg,” Erickson said. “And hopefully get more people to come downtown, to experience all the growth that’s happened in the last four years. (Downtown Vicksburg has) changed so much. It’s been a huge kind of Renaissance. And it’s just the beginning.”

“We’ve grown a lot and reimagined ourselves a handful of times,” Erickson said. “We’ve learned a lot from the city. I feel like they’ve embraced us and lifted us up.”

The eatery’s kitchen has also gone through complete remodeling. Erickson said part of that is to keep up with demand, but the remodel will also allow Head Chef Blake Parmegiani to continue to experiment with new dishes.

Even with all the changes, Erickson said guests will still be able to order the old favorites.

“Not that we’re getting rid of … fried pickles, patty melt, all that stuff,” Erickson said. “It’ll allow us to cook more of those things, and get food out in a quicker manner. But also allow us to have more entree items.”

The restaurant has become significantly busier since it first opened. Erickson said the changes in the kitchen will help Parmegiani and the rest of the staff keep up with the higher demand.

Erickson said he quickly recognized Parmegiani’s skill and creativity, and that “his culinary talent was higher than just a pizza spot.”

The new kitchen will help Parmegiani continue to experiment.

“Over time … we’ve started adding bigger, more complex dishes,” Erickson said. “The expansion was really to give Blake a playground to be able to produce more of that.”

For the celebration, Erickson said Key City will have a variety of special brews on tap. The ‘Miss Hippie’ IPA will be available to go with the psychedelic theme as well as their anniversary beer, which Erickson described as “a big ol’ sticky, sweet, imperial stout.”

They will also be offering a beer called the ‘Pretty in Pink Boots.’

“(It’s) a beer that we brew in support of the Pink Boots Society, which is a nonprofit that promotes the growth of women in craft beer,” Erickson said. “(The) craft beer (industry) suffers tremendously from a lack of diversity when it comes to racial equality and gender equality and non-binary equality.”

A portion of the proceeds goes to the Pink Boots Society.

Erickson said he is excited about the future of Key City.

“It’s been really cool, crazy to see the growth that we’ve all had as individuals,” he said. “(And) the city showing up time and time again.

“I can’t believe it’s already been four years. It seems like yesterday,” he added. “I’m just excited to get it all done and keep making beer for Vicksburg.”