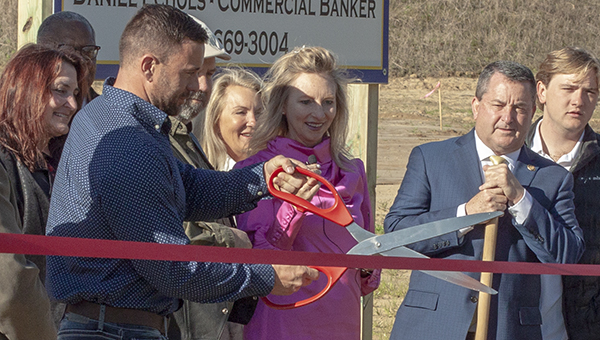 The ribbon-cutting ceremony for Ash Meadows took place last Friday morning, marking the beginning of construction for the housing development.

Thirty-two new homes are planned to be built on the site, located on Indiana Avenue across the street from Calvary Church. The ceremony was open to the public. Local city officials, developers and other community members were in attendance.

According to Pablo Diaz, CEO and Executive Director of the Vicksburg-Warren Economic Partnership, the project will benefit the community in a number of ways, including “address(ing) the short supply of new housing inventory in the area which will help in attracting more people to live and work in Warren County and Vicksburg.”

Diaz also said that some of the people the city is trying to attract with the new homes are individuals who already work in Vicksburg, but commute from elsewhere.

“We have over 7,000 employees in Vicksburg that live somewhere outside Warren County,” Diaz said. “These employees commute every day and have been doing so for a long time.”

Several community leaders made remarks at the ceremony, including Mayor George Flaggs Jr.

“We want to thank you and welcome you, and say to you, and to any investor out there, that we’re in business to stay in business,” Flaggs said. “we believe that collaboration is the best way to economic prosperity.”

Kelle Barfield, Warren County Board of Supervisors President, also expressed her desire for investment in new development to continue. Barfield said she wanted to “challenge others to step up and take action… build new developments (and) build our property tax base here.”

Mary Jane Wooten is the realtor brokering the deal. She said of the developers, “I’m just really thankful that they’re coming to Vicksburg, we’ve been trying to recruit contractors to do new construction.”

According to Wooten, houses can be pre-purchased now by calling Curb Appeals Real Estate.

“If anybody is interested in buying houses, reach out to us,” Wooten said. “We’ll be glad to help them.”

The new homes are being built by Louisiana-based construction company Russ Builders, LLC. The company is owned and operated by Joseph Russ Sr. and his two sons, Nicholas Russ and Joseph Russ Jr. The Russ company purchased the land in 2021.

The size of the homes will be in the range of 1,700 to 2,400 square feet. They will have three to four bedrooms and two to three baths. The development will have underground gas lines, sidewalks and streetlights. Joseph Russ Sr. said it will “be a nice community (where) you can get out with your kids and not have to worry.”

“We want to make sure that it’s a family-oriented (neighborhood) as much as we can… people get away from that nowadays,” he said. “But that needs to come back into society.”

When asked how long construction would take, Russ said construction will start on the first five houses in the next couple of weeks, which he expects to be completed in three to four months. After that, demand will determine how quickly the development will be built.

There will be a variety of architectural styles available for homebuyers to choose from.

“We love arcadian, we love ranch,” Russ said. “We do all kinds.” The company is working to make the homes unique from one another.

“A lot of track builders come in and give you one or two (designs),” Russ said. “I don’t like that. I want my community to look special. … We strive to make that happen.

“I want to make sure (people) understand how much the city has been involved in making this happen,” he added. “They are looking out for their community. And that’s a breath of fresh air.”

Diaz said that the City, County, and Partnership will continue to address the housing shortage in the community.

“We are talking to other investors interested in building new homes in other parts of the City and County as we believe new home construction is essential to sustaining future economic and social growth in the region,” he said.