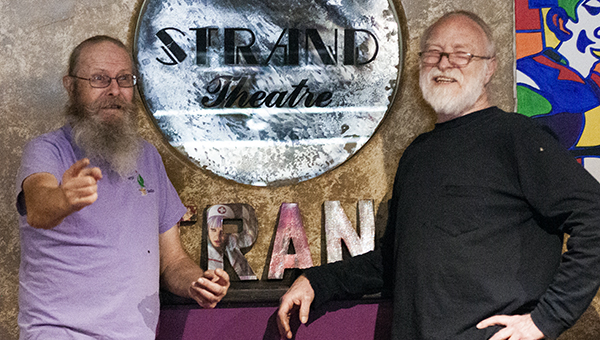 The Westside Theatre Foundation recently celebrated its 10th anniversary at the Strand Theatre in downtown Vicksburg.

The celebration coincided with the lease renewal for another year’s use of the theater.

The Strand is operated by Jack Burns and Daniel Boone under the Westside Theatre Foundation, founded by Burns in 2008.

“Mr. Burns is the head of the Westside Theatre. I don’t know what his title is,” Boone said.

At the outset, the foundation was mostly a community theater organization that would perform in the Choral Room at the Vicksburg Hotel building. A few years after its creation, Burns moved the venue for the foundation to the Strand. He asked Boone if he would curate and show films in the interim periods when live theater performances were in production.

Since then, Boone has been in charge of film programming and Burns has run the live theater productions.

The WTF is a non-profit organization, funded entirely by donations from theater-goers and members of the community.

“Most community theaters and probably a lot of art-house theaters come under that umbrella,” Boone said.

Operating the theater has been a labor of love for Boone and Burns. The duo says they are filling a niche demand that has enriched the community.

“It’s very personally rewarding, but also one of our mandates is to promote cultural accessibility within the community,” Burns said. “So that arthouse film patrons and theater patrons and actors, actresses, musicians and filmmakers have an outlet to express themselves in a safe and shocking way.”

While the shows are funded entirely by donations from the community, the work is done entirely by volunteers.

Boone owns and operates Highway 61 Coffee House in downtown Vicksburg. He says it has turned out to be an important part of finding people who are eager to participate in the organization.

“Jack… is quite a networker. We opened the coffeehouse 16 years ago, which almost coincides with Mr. Burns’s need for finding talent,” Boone said. “So, Jack has spent many hours in (the coffeehouse) talking to people, trying to see if they had any aspirations to be involved in the theater. Many, many unsuspecting, would-be actors have fallen into his clutches right here at the coffee shop.”

Burns recalled finding an actor for the foundation’s production of the Musical “Rent” in the coffee shop.

“There was a young woman that just radiated charisma,” he said. “And I said to her, ‘Well, look, we’re planning on mounting a production of ‘Rent,’ can you sing and dance?’

“Well, this is where the story diverges a little bit. I believe she dropped her baby and sprang up on this table and burst into song,” Burns added. “Other people claim she set her baby down quickly and sprang to the table and started singing. It was a spontaneous audition.”

Thanks to financial support from the community, the theater has had some significant upgrades since the foundation started putting on shows there.

The screen used for projecting films has been improved upon several times. Boone said when Burns first asked him to show a movie at the theater, the screen was a homemade affair.

“He had this giant (screen that was) several bedsheets sewn together. And there was painter scaffolding in the back of the room with a projector on it,” Boone said. “It was quite crude.”

The screen was then upgraded to a proper projection screen. However, according to Boone, it needed to be stretched. “(For) the first movie we showed, we had paint cans hanging from the screen to give a little tension,” he said.

The new screen worked but took about two hours to set up. This was a big chore, according to Boone, because the screen would need to be taken down for actors to rehearse for the live theater shows and then put back up afterward for screening films.

“This very nice man, who’s no longer with us, was there once and he saw what we were doing,” Boone said. “He said, ‘I can’t believe you’re working so hard.’”

The “very nice man,” Dewane Youts, asked Boone how much it would cost to purchase a screen that was easier to manage. Boone told him it would be $1,700. The foundation received the money the next day.

The same patron later matched funds with other donors to the foundation so that a new air conditioning unit could be installed in the theater. Previously, productions and screenings had to be stopped for months at a time during the coldest and hottest parts of the year.

The building housing the theater came under new ownership in 2020, leaving the future of the theater uncertain. However, the new owners and the WTF were able to come to an agreement and a one-year lease was signed.

“(The owners) have been very receptive to what we’re doing here,” Boone said.

The foundation recently signed a second one-year lease, meaning the operation of the theater in its current form will continue for at least another year.

A live performance of the dark comedy “A Devil Inside” will be premiered on Friday, April, 8 at 7:30 p.m. There will be subsequent performances on April 9, 15 and 16.

Tickets are available for prepurchase online and at the Highway 61 Coffee House.

‘ON ALERT’: Warren County on weather alert for third…