Vicksburg’s Lesley Silver to be honored as a Mississippi Treasure 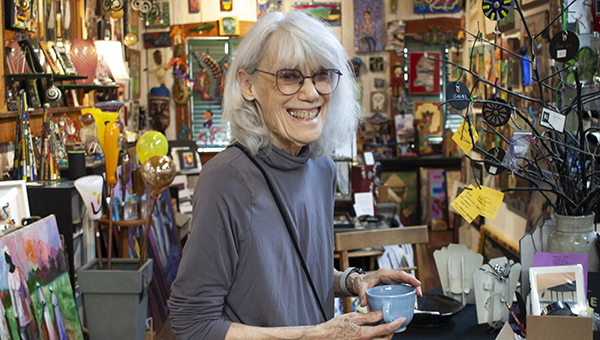 Lesley Silver, owner of the Attic Gallery in downtown Vicksburg, will be honored as a Mississippi Treasure on April 12 in Jackson. (Photo by Ben Martin | The Vicksburg Post)

Vicksburg resident Lesley Silver will be honored on April 12 as a “Mississippi Treasure” by The Mississippi State Committee of the National Museum of Women in the Arts at its Honored Artists Luncheon.

She is being recognized for 50 years of supporting and promoting artists through her business, the Attic Gallery in downtown Vicksburg.

The experience of visiting the Attic Gallery is one travelers from across the world come to Vicksburg to see. It is dense, with stacks of original artwork filling the space. One would need several hours to physically rifle through the inventory to see everything. The work spills over into Silver and her husband Daniel Boone’s upstairs apartment and into the coffee shop Boone runs downstairs.

Over 50 years ago, the Attic Gallery had its start on the 1400 block of Washington St. above her then-husband’s jewelry store and bridal gift shop. The upper floor had been in disuse for some time. There was no electricity.

“It was really dirty and dusty and full of great junk,” Silver said. “It was very neat. I loved it.”

However, Silver said she did not set out to make the space into a gallery.

“I never did anything intentionally,” she said. “I just reacted to what was happening and what was organic.”

In 1971, Leslie took a trip to Los Angeles, Calif., where she was visiting art galleries. She entered Comsky Gallery on La Cienega Boulevard in Beverly Hills and spoke to the owner, Cynthia Comsky. She was invited over for dinner and became friends with Comsky and her husband.

When she returned to her home outside Vicksburg, Silver and her husband decided to send Cynthia $500 to “see what happens.”

During Silver’s 5-year-old daughter’s birthday party, there was a knock at the door. It was a mailman with a package of etchings and engravings from the Comsky Gallery. She and the other mothers at the party sat around sorting through and admiring the art. Many of them took pieces home.

There wasn’t much left, so they decided to send Cynthia another $500, which paid for another box of artwork.

Eventually, the house was filled with art, so she started to fill the room on Washington.

“So somehow, all these people got together and we all swept up that place and we threw stuff out the back window, which we shouldn’t have,” she said, noting that art was hung on the walls and spread out on some old tables that were brought in. “And people came. And it was exciting.”

The business was somewhat informal at the start. Silver would travel around the country purchasing reproductions and prints to display in the upstairs room. Occasionally pieces would be purchased, but for Silver, profit wasn’t the main concern.

Silver remembered a man who came in once. He said, “This place will never work.” She didn’t know what he meant. Silver said she didn’t think of it as a gallery, just a place to display the art she loved.

During the mid-1980s, the gallery began to shift its focus to regional folk art.

In 1984, Silver was approached by Dr. William Ferris, an author and scholar of southern culture and folklore.

“He said, ‘There’s something I want you to do,’” she said. “’There are a group of artists that exist in Mississippi, that people are taking advantage of.’”

The artists Ferris was referring to were usually called ‘outsider artists’ or ‘folk artists’ in the art world. The folk art scene was gaining popularity nationwide. However, Silver said, people from around the country were going to rural areas, finding these artists and paying as little as $1 apiece for work they had made.

“(Ferris) said someone needs to protect them,” Silver said.

Silver started networking and finding folk artists from around the region to feature their work in the Attic Gallery. The shift in focus, like many aspects of the Attic Gallery, was organic and instinctual.

Since then, the Attic Gallery has retained a focus on Southern folk art.

Silver recalled being at an artist gathering in New Orleans in 1997. She was in the audience of a panel of what she described as “talking heads” discussing the terminology of folk art.

“Do we call it outsider art, folk art, Brut art?” Silver said. “And someone, I remember, in the audience stood up and said, ‘Why don’t we call it art?’ Which is what I feel.

“Seeing people’s reaction to folk art is always intriguing. Some would walk in and look and walk right out. Which was fine. I don’t mind,” Silver added. “But if you can get people to stay in a place and just talk to them, they begin to feel more comfortable and they start seeing things they didn’t see before. I think art really teaches people to see. I just want them to be there. And the art does its own job.”

Eventually, the Attic Gallery was moved to its current location on the 1100 block of Washington Street, where just last year the community celebrated the gallery’s 50th anniversary.

When asked about the changes she has seen in terms of women in the art world, Silver said, “I’ve never noticed us having more men than women (in the art world).”

Instead, she said she thinks it’s more likely that the compensation an artist receives for their work has been weighted more favorably for male artists.

Silver said she is excited that women are receiving more recognition than they have in the past for their artistic contributions.

“I certainly have never treated anything (differently) because a man or a woman (created it). I just look at the art. That’s what speaks for itself,” she said.

Artist Ellen Langford, based in Jackson, is also being honored alongside Silver at the luncheon. The two have worked together several times over the years, with Langford traveling to Vicksburg on occasion for live painting demonstrations in the Attic Gallery’s courtyard.

“I love her,” Silver said, noting she particularly admires Langford’s painting process, which Silver described as essentially focusing on the creation of the negative space on the canvas to produce the positive space of the subjects.

The Honored Artists Luncheon will take place on April 12 at 11:30 a.m. at the Country Club of Jackson. For more information on the event or to purchase tickets, visit www.facebook.com/nmwamsc.

The National Museum of Women in the Arts in Washington, D.C. is the first museum in the world solely
dedicated to championing women through the arts. NMWA advocates for better representation of women
artists and serves as a vital center for thought leadership, community engagement and social change. The
Mississippi Committee is one of 15 national outreach committees which spread awareness about the
museum’s mission, organize programming and advocate for local women artists.

Battle of the Brains opens Saturday for Vicksburg area…